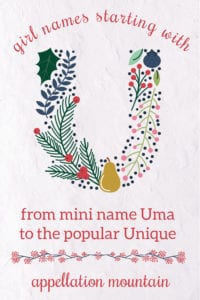 Girl names starting with U could be called the rarest of the rare.

The letter U ranks dead last –  26th out of the 26 letters of the alphabet – in terms of popularity for girls’ names. Look for girl names starting with U in the US Top 1000 and you’ll find zero.

It’s the only letter that fails to send at least a name or two to the popularity charts.

And while it hasn’t always been quite that dire, the simple truth is that U names aren’t terribly plentiful for our daughters, at least not in English.

Still, a handful of options exist. And they’re all the more intriguing for offering such a rare and compelling initial. In an age where every playground is packed with Emmas and Ellas, Avas and Amelias, Olivias and Isabellas, there’s something delightful about girl names starting with U – the long-neglected vowel.

GIRL NAMES STARTING WITH U

German and Scandi names give us Ulrich and Ulrikke, all from a mix of Germanic and Old English roots. Ulrica is rare, but possibly wearable. After all, it sounds something like former favorites Erica and Veronica.

A Hindu goddess name, Uma is on everyone’s list of girl names beginning with U thanks to actor Uma Thurman. It means flax. A new generation also knows Uma as the daughter of Ursula in Disney’s Descendants.

Several origins are possible, including the Latin word for one – which ties Una to Unity – or an Irish name meaning lamb, and sometimes spelled Oona or Oonagh.

A mermaid name, Undine comes from the Latin word for wave.

A more name-like take on Unique.

While the word literally means one of one, girls named Unique are surprisingly plentiful. Well over 100 girls have been named Unique every year since the late 1980s. It’s even made it into the Top 1000 a handful of times, making Unique a contender for the most popular of girl names starting with U.

A word name that ought to fit with virtues like Amity and Felicity, Unity has been hobbled by the long shadow of Unity Mitford, an English socialite and Nazi sympathizer. As her memory fades, there’s been a clear uptick in the name’s use.

We name our daughters after goddesses like Thalia and Clio, so how about fellow Muse Urania? Her name means heavenly, and in Greek myth, she’s the Muse responsible for astronomy.

From the Latin ursa, meaning bear, offbeat Ursula is known to this generation of parents as Phoebe’s evil twin on Friends and, of course, the sea witch who grants Ariel’s wish in The Little Mermaid.

What are your favorite girl names beginning with U? 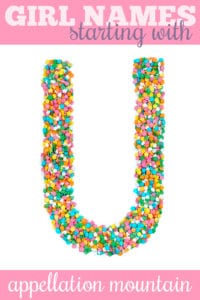 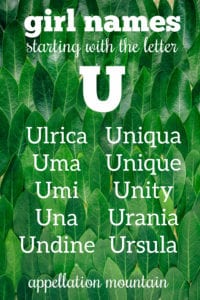