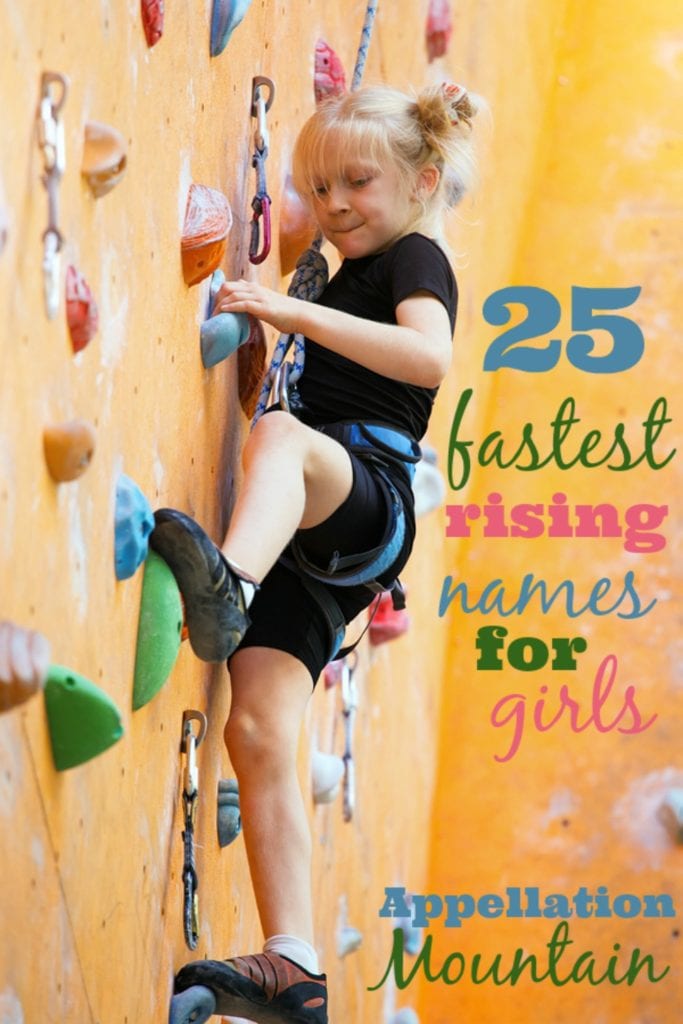 What were the fastest rising names for girls 2016 in terms of actual births?

We often look at change in rank. This name rose by 15 places, or that one leapt over 100 spots. Those changes signify name trends. And yet, when the list is re-ordered to reflect increases in numbers of births, things shift.

Prime example: the top name on this list falls pretty far down the list if we order by rank change.

For now, it’s worth noting that even a Top Ten name might have more momentum than you’d guess.

Alexa – 1,802 more girls were named Alexa during calendar year 2016. Credit to Amazon’s digital assistant by the same name, perhaps? After all, the name had dropped steadily for a few years prior. The device debuted in November 2014, reshaping our idea of the name. Now it’s less Alexandra short form, more super-capable Gal Friday meets Hal. Word of warning: having a human Alexa in the same home as a high tech one can cause problems.

Hazel – Hazel appeared on the previous list, in the 11th position. The name remains on fire, with an additional 1,393 girls given the name. That takes Hazel to the #2 spot.

Mia – At first glance, Mia offers little excitement. The name ranked #6 in 2013, #6 in 2014, and #6 in 2015. Flat, right? Not exactly. Half of the Top Ten names for girls in US actually fell in terms of raw numbers, while half gained. Mia gained more than most – 1,378 new births. Even though it wasn’t enough to move Mia up a spot or two, this is still a name embraced by a growing number of parents – at least last year.

Charlotte – Thanks to Will and Kate’s darling daughter, Charlotte dominated headlines when it cracked the US Top Ten in 2014. It gained one place in terms of rankings in 2015. But if we turn our attention to raw numbers? An additional 1,284 births in 2015 translates to #4 on the list of fastest rising names for girls 2016. That’s a big leap from the name’s #15 spot on the previous list.

Scarlett – Scarlett was the ninth fastest rising girl’s name last time; this year, it’s up by 1,135 births. That makes Scarlett the fifth fastest riser in 2016, a name that continues to catch fire.

Amelia – Amelia also repeats and gains a few notches on the fastest rising names for girls 2016 list. It ranked #16 last time, and leaps to #7 this time around. That works out to 1,068 additional births.

Riley – Almost 1,000 more girls – 946 to be exact – were named Riley in 2015, making it the eighth hottest name for girls. Credit almost certainly goes to Disney-Pixar smash hit Inside Out, a trip inside the emotions of eleven year old Riley Anderson. The 2015 movie helped revive that had fallen in recent years.

Aurora – On the flip side, Aurora is Sleeping Beauty’s name in the Disney version of the tale – but there’s no pixie dust behind this choice. Instead, Aurora combines our love of A names for girls with the celestial names trend. If Stella and Luna can top the charts, why not Aurora? 895 more girls were given the name last year.

Adeline – Combine all the spellings of Adeline, and this name becomes much more popular than it appears at first glance. But even beyond the multiple spellings, Adeline is rising. 869 more girls were given the name in 2015.

Penelope – Ancient and quirky, Penelope ranked #14 on the prior list, and rose to #10 this year. That translated to 859 new baby girls in the prior year.

Adaline – Remember what I said about Adeline? Here’s another spelling catching fire! Adaline ranked 11th of the fastest rising names for girls 2016 list. That represents 737 more girls given the name. The reason for the gain? Blake Lively’s April 2015 movie The Age of Adaline.

Ava – I mentioned that half the girls’ Top Ten names fell in raw numbers, while half gained. File Ava among the gainers. 700 more girls received the name, making this Top Ten favorite even more popular.

Eleanor – In the boys’ post, I mentioned that traditional names can be trendy. That proves true on the girls’ list, too, with Eleanor gaining by 698 births. This is another repeater; it ranked 18 on the prior list.

Mila – A decade ago, no one named their daughters Mila. Now the name is white hot, with an additional 679 newborn girls named Mila.

Harper – Harper occupied the #2 spot on this list last year. While it’s slipped since, there were still 677 additional babies given the name last year.

Violet – Early twentieth century favorite Violet returned to the US Top 100 in 2012, and it continues to inch its way up the charts. An additional 623 girls were named Violet.

Evelyn – Like Harper, Evelyn appeared on the prior year’s list, too. It’s fallen from #5, but still gained, with an additional 621 girls given the name.

Stella – Stella climbed by 604 births. Ella, Bella, and Isabella all declined slightly on the previous list, but Stella continues to shine.

Paisley – Paisley ranked #10 on last year’s list. While it has slowed down, there were still 538 additional births.

Raelynn – Racheal Lynn “RaeLynn” Woodward competed in season two of The Voice in 2012. Since then she’s enjoyed some success – enough to bolster the birth rate by 579 newborns.

Quinn – Glee’s Quinn Fabray – girlfriend to Finn Hudson – sent this name soaring in 2009. It hasn’t stopped yet, with an additional 538 girls given the name.

Skylar – Skylar has cooled off slightly; it appeared at #8 on the previous list. It’s still up by 526 births.

Fastest Rising Names for Girls: Up More than 400

Aria – Pretty Little Liars and Game of Thrones sent musical Aria straight up the charts. An additional 478 girls were born.

Luna – Luna fell from the 23rd to the 25th fastest rising names for girls, but that still means 476 more girls born with the name for this list.

Did any of these surprise you? Are any of your favorite names on this list?