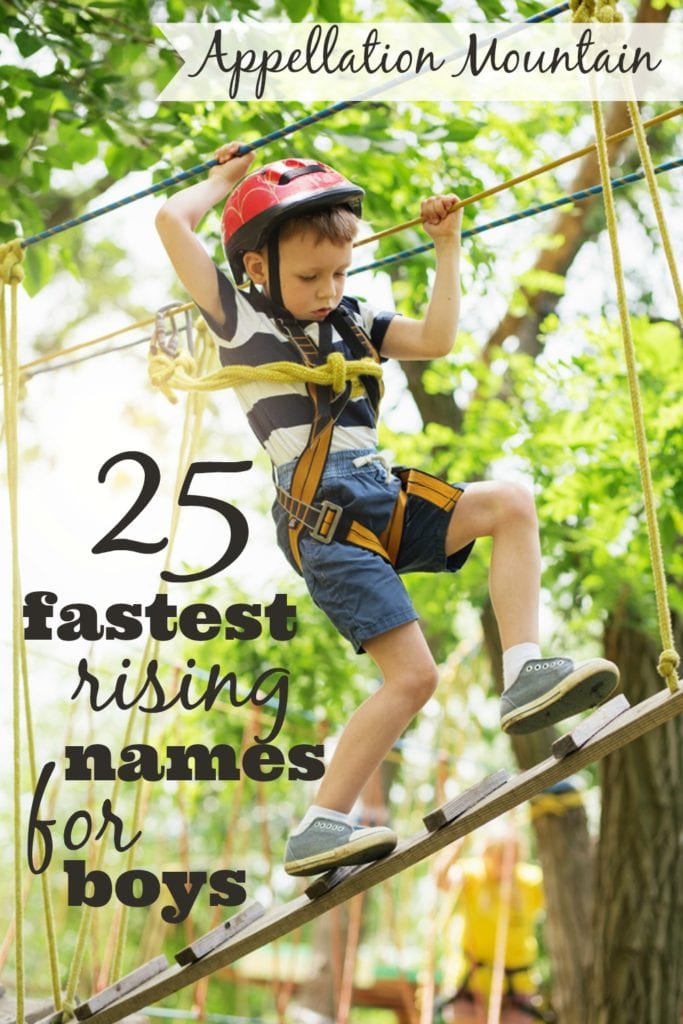 What were the Fastest Rising Names for Boys 2016?

We typically look at change in rank. Which names leapt from #312 to #188? Make no mistake, that’s a big gain. But what can we learn when we look at the actual increase in the number of newborns given a name?

It’s worth considering, because:

Oliver – For the second year in a row, Oliver leads the pack. 2,227 more boys were given the name in 2015 than in 2014. It’s a big leap, and it translated to a big jump in the rankings, too. For now, Oliver remains just inside the current US Top 20. Another jump like this, and Oliver will land smack in the Top Ten.

Matteo – Matteo failed to make the fastest rising names for boys last year, but it soared in 2016. It gained by 1,326 actual births.

Mateo – Now here’s an interesting twist! The fourth fastest rising name is nearly identical to the second fastest rising name. There were an additional 1,283 Mateos born in 2015. Of course, tally them up, and Matteo/Mateo outpaces Oliver.

Lincoln – Presidential and place-name Lincoln combines a certain gravitas with a cool, modern vibe. It ranked 11th on last year’s list; this year, 1,174 additional Lincolns make it the 5th of the fastest rising names for boys 2016.

Ezra – Parents are falling for Ezra, a name equal parts Biblical and edgy. It ranked 13th on last year’s list, and, with 927 additional births, comes in at 6th this year.

Theodore – Move over, Alexander! Theodore gained 10 places on this list last year, and 7 more this year. That works out to 920 more Theodores born in 2016.

Hudson – Hudson feels like another Lincoln. You can’t call this name invented or new, but it’s thoroughly modern. 809 more newborns in 2016 took it to the 8th place on this year’s list, up from 19th last year.

Wyatt – We’ve been loving Wyatt for a while now, and with 785 additional births, it’s still among the fastest rising names for boys 2016.

Asher – Asher continues to build momentum, up from 14th on the previous list to the 10th of the fastest rising names for boys 2016. That represents a gain of 780 births.

Henry – A confusing point: traditional names, choices rich with history, come in and out favor every bit as much as those trendy inventions. The difference? Henry boasts a long history of use, and is bound to rise and fall over the centuries. At the moment, Henry is rising thanks to 762 boys given the name.

Sawyer – A surname name with a literary, Americana vibe, Sawyer was given to an additional 674 boys.

Abel – Another Biblical riser like Asher and Ezra, 665 more boys received the name.

Leo – Leo continues to reign, with an additional 625 boys answering to the fierce and vintage name.

Adriel – This obscure Old Testament name came out of nowhere earlier this century. It gained by 591 newborns in 2016.

Greyson – It’s another Matteo/Mateo situation! There were 556 additional Greysons born in 2016. Add that together with Grayson, even higher up on the list of fastest rising names for boys 2016, and this is one we’ll hear more and more.

August – August also repeats on this list for a second year, rising from 23rd to 17th, thanks to 539 additional births.

Nolan – Upbeat and Irish, parents welcomed 532 more Nolans than the year before.

Everett – A new favorite with deep roots, 512 more baby Everetts puts this name on the list of fastest rising names for boys 2016.

Dawson – Years after Dawson’s Creek left the air, this surname name is rebounding. When the original series debuted in the late 1990s, Dawson rocketed into the Top 200, but it didn’t last. Now a gain of 502 newborns suggests that it might be ready for fresh consideration.

Kyrie – File Kyrie with spiritual names like Messiah and Bodhi. It comes from the Greek kyrios – Lord. 473 additional boys received the name, earning it a spot on this list.

Owen – Owen claims plenty of history, but we’re more in love with this name now than ever before. An additional 449 boys received the name that the prior year.

Cooper – Surname name Cooper was given to 435 additional boys, earning it the 24th spot on this list.

Killian – This Irish appellation owes its rise to a fairy tale. ABC’s Once introduced Captain Hook in 2012-2013. Doubtless that explains some of the name’s growing appeal. An additional 433 boys were named Killian, putting it on our list of the fastest rising names for boys 2016.

Are any of your favorites among the fastest rising names for boys 2016?