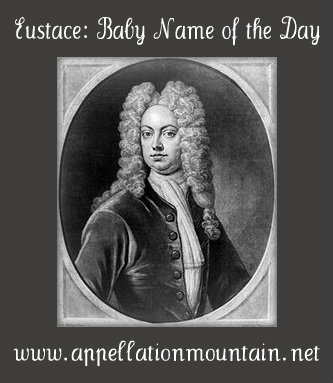 What happens to once-fashionable names?  Do they fade away, or do we see them in a different light?

Thanks to Shan for suggesting Eustace as our Baby Name of the Day.

I would be shocked to meet a baby boy Eustace.

Eustace hasn’t cracked the US Top 1000 in over a century.  You’d have to go back to the 1920s to find a year when more than a dozen newborns answered to Eustace.

The saint was a Christian convert, and because he was inspired to convert after a vision during a hunting trip, he’s the patron saint of hunters.  He suffered like Job but held fast to this faith.  There’s a gory story about Eustace his death by fire.

It may be nothing but legend, but he was a big deal in the Middle Ages.

So Eustace was a hero and a scoundrel, a ruler and a saint.  The name must have been thoroughly wearable in the day.

In the twentieth century, Eustace was anything but.

First there’s the Chronicles of Narnia character.  In the words of C. S. Lewis, “There once was a boy called Eustace Clarence Scrubb, and he almost deserved it.”

Scrubb starts out an arrogant, whiny brat.  He spends some time as a dragon.  If you read to the end of the series, you’ll know that ultimately Eustace proves himself heroic – it’s the kind of redemption that could make Eustace a Neville name – but most of us think of the character from the early books.

Then there’s Eustace Tilley, the monocle-sporting dandy who has graced many a New Yorker magazine cover.  The humorist Corey Ford gave the character his name in the 1920s, inspired by a maiden aunt’s surname and a Columbia classmate’s first name.

Lastly, I think of Eustace Bagge, the crotchety, cruel senior on Courage the Cowardly Dog.

Speaking of courage, it would take a lot to revive Eustace.  Still, if Trace is hot for boys, does the prospect of Stace – combined with his rich history – offer any hope for Eustace?