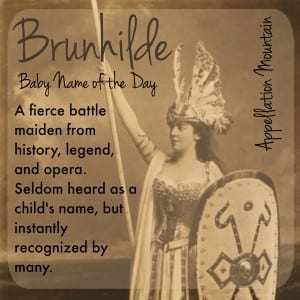 Let’s look at a warrior queen with a clunky-cool name, immortalized by legend and opera.

Thanks to Sarah for suggesting one of her favorites! Our Baby Name of the Day is Brunhilde.

Brunhilde sounds like a bruiser. Her name comes from the Germanic brun – armor – plus hild – battle.

While Matilda and a few other hild names have come into general use, Brunhilde has remained the stuff of history and legend.

Back in the sixth century, a Visigoth princess usually called Brunhilda (and sometimes Brunehaut) married King Sigebert I of Austrasia.

Chilperic and Galswintha were miserable from day one, and Chilperic quickly had his bride murdered and married his mistress, Fredegund.

The resulting turmoil lasted over the generations. First Siegebert and Chilperic went to war, and then succeeding generations of cousins did the same.

Brunhilda served as regent for her son, then grandsons, and finally for a great-grandson. But over the years, high-ranking nobles became suspicious of the queen. And the queen herself seems to have become ruthless. Early days, she repaired churches and roads and fortresses and re-organized the army. As a great-grandmother, she schemed and ordered her enemies assassinated.

She’d live a long life, but in her seventies, Brunhilda was arrested, accused of treason, tortured and excited. Not a happily ending.

Let’s move on to Brynhildr, legendary Queen of the Valkyries, based on the historical queen.

She appears in Norse mythology’s Völsunga saga as well as the Germanic Nibelungenlied.

In the Võlsunga, Brynhildr angered the god Odin, and so was forced to live her life as a mortal. The hero Sigurd rescues her and they fall in love. Except there are complications. Sigurd is enchanted and forgets his love, so they both marry others. Drama follows.

The story of the Nibelungenlied isn’t very different, only this time Brunhild is queen of Iceland, and Gunther and Siegfried are vying for her affections in a series of competitions. Gunther wins, but not without Siegfried’s (considerable) help.

Both legends are the inspiration for Richard Wagner’s Der Ring des Nibelungen – the Ring Cycle. I can’t do justice to the epic tales in this space, but even if you’ve never heard a note of the opera, an awful lot of it has trickled into pop culture, from Bugs Bunny to Xena: Warrior Princess.

There’s a comic strip witch called Broom-Hilda, and in the movie Django Unchained, Django’s wife is Broomhilda. There’s also a brief mention of the Brynhildr legend in 2013’s Vikings series.

And then there’s the Marvel Comics heroine sometimes called The Valkyrie, sometimes Brunhilde. With her enchanted sword and winged horse, she’s not exactly faithful to the Norse legend, but she’s undeniably a fierce warrior maiden.

Brunhilde is one of those interesting cases – we recognize it instantly as a name, and from some patchwork of Looney Tunes and myth, we have a sense of the character as fierce and commanding.

But none of the spellings has ever been used in the US, except for a very few occasions. And Brunhilde feels a little clunky nowadays.

Still, if you’re a fan of opera or just the legend, Brunhilde could be an intriguing choice for a daughter’s middle name – or even a very daring first.

What do you think of Brunhilde? Too clunky to consider? Or an undiscovered gem?