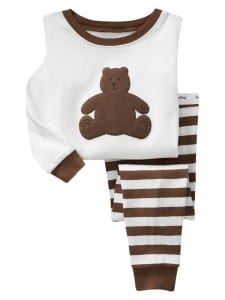 Have you shopped Gap Kids lately?

Thanks to Kerri for suggesting Brannan as our Baby Name of the Day.

Gap Kids has been in existence since the 1980s, but their signature bear is younger.  I can’t date Brannan’s introduction to a specific year, but he has become something of a fixture.  Brannan appears as a tiny insignia on Gap Kids polo shirts and makes frequent appearances on pajamas.  Stuffed bears are also often found in the stores.

I’ve always wanted to know why he was called Brannan, and was delighted when Kerri asked.

Turns out there’s a logical explanation, though like his birthdate, I can’t confirm this through official channels at The Gap.

Samuel Brannan made a fortune in the California Gold Rush.  He also founded the California Star, the first newspaper in San Francisco, operated stores that supplied prospectors, and held elected office in the rapidly growing city.  Little wonder, then, that plenty of San Francisco place names were given in his honor.

There’s Brannan Street.  Brannan Island is a California state park, northeast of the San Francisco Bay, a choice spot for boating and swimming.  There’s also a Brannan Creek and a Brannan River, and other place names and a smattering of buildings and businesses, too.  Some of them were named fairly recently, suggesting that Brannan is just part of the city’s onomastic landscape.

Where did Samuel’s surname come from?  It’s almost certainly Irish in origin, and that an ending is the same as we’ve seen with Aidan and Ronan – little.  It could come from braon – drop, as in moisture – or maybe bran – raven or crow.

Bran appears in both Welsh and Irish legend.  He’s not a big deal in Ireland, but the Welsh figure is intriguing.  Bran the Blessed was a King of Britain.  His tale is about the perils of extended family.  The Irish king comes to court Bran’s sister, Branwen.  Things are going swimmingly when a jealous madman of a half-brother shows up and wreaks havoc.  Bran manages to salvage things and the wedding goes forward.  Still, the shadow lingers – Branwen eventually needs to be rescued from Ireland.  Bran, Branwen, and Branwen’s son all lose their lives in the chaos, so this is not one with a happy ending.

Story aside, he has a great sound.  If you’d like something slightly more elaborate, there’s the related Brannigan.  And then there’s:

Plus Brian and Brogan and Bronson and Brecken, and oodles of variants of Brayden and Braylon.

So while Brannan is rare, and seems distinctive in writing, when spoken, it might be a different story.  After all, only six boys were named Brannan in 2011, and he’s always been pretty rare.  But say Brannan, and others are likely to hear Brandon.

It’s not a deal breaker, though.  Given our considerable affection for Irish names and especially surnames, Brannan wears just as well as Riley or Ronan, Callahan or Colm.