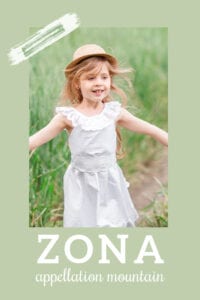 The baby name Zona carries a powerful meaning and a legacy as a long-time Top 1000 choice.

Thanks to Beth for suggesting a gem from her family tree as our Baby Name of the Day.

The baby name Zona translates to girdle in Greek.

In ancient myth, girdles were garments of great power. Aphrodite’s girdle ignited love and passion. Ishtar’s girdle kept the world fruitful and multiplying. They could be borrowed and stolen, and men wore them, too – Odysseus had a magic one that was part-life vest. Thor stored his weapons in one. And Saint George used one when he slayed a dragon.

In some senses, they’re basically a belt. The ropes that belt religious garments are sometimes referred to as girdles, too. (Though other terms, like cincture and fascia, are more common in some traditions.)

Most of us probably think of girdles in the same category as a corset. As it happens, girdles replaced corsets in the late nineteenth century, as a more modern form of shapewear. Both, of course, are now packed away in the past.

The Greek word for girdle or belt also leads to our word zone. It first meant a geographical belt – think of the equator, encircling the globe. But over the years, zone has come to mean any defined region. We’ve been playing zone defense in sports for nearly a century; and we’ve been zoning land for permitted uses even longer.

None of this seems like it would suggest a stylish name. Except it did.

It might simply be one of many popular -ona names from the era. Back in the day, Nona, Ona, Lona, Leona, Dona, Mona, Iona, Arizona, Winona, Ramona, Verona, and Frona all ranked in the Top 1000.

The baby name Zona simply sounded like a reasonable choice around the turn of the twentieth century.

Way back in 1906, Serbian author Stevan Sremac penned a novel titled Zona Zamfirova. Sremac’s Zona was a beautiful girl, the daughter of a wealthy man. She falls in love with a regular old goldsmith, an unthinkable match. They might be star-crossed lovers, but this story has a happy ending.

In 2002, it was made into a movie, one that became among the most popular Serbian films of all time.

This means that the baby name Zona must have Serbian roots. The novel and the film both use a specific dialect, spoken in Niš, where the story takes place. Pinning down the exact origins of Zona has proved elusive. But even if it wasn’t especially Serbian when Sremac chose it, the power of his story certainly has made it so.

She grew up writing stories from a young age. After working as a journalist in New York, she returned home to focus on fiction.

Gale eventually won the Pulitzer Prize for drama – the first woman to earn the honor. The year was 1921, and her celebrated play was an adaptation of her story, Miss Lulu Bett. It also became a successful silent film – though the movie’s ending is a little more conventional.

In the story, Lulu strikes out on her own, leaving an unappreciative family and a failed marriage. The original version ends with Lulu striking out on her own. The movie gives Lulu a love match instead.

Besides her literary triumphs, Gale was an activist. She advocated for several causes, most especially women’s rights. The theme of Miss Lulu Bett – a woman finding her way to independence – mirrored the work Gale did in real life.

This lends the baby name Zona a certain energy and strength.

There’s another nineteenth century Zona, and her story is the opposite of the triumphant Zona Gale. This one takes us to Greenbrier, West Virginia.

Zona Heaster was murdered by her husband in 1897. The crime might have gone undiscovered, but shortly after Zona’s funeral, her mother claimed that her daughter’s ghost appeared and explained that her death was no mere accidental fall, but murder. Her mother successfully campaigned to have her daughter’s body exhumed, and an autopsy performed. Sure enough, Zona had met a bad end, and her husband spent the remainder of his days in prison.

As for Zona, she’s known as the Greenbrier Ghost. And while she hasn’t done any haunting since her husband went to jail, the story lingers. It’s been re-told many times, in books and on stage. And more recently? Comedy Central’s Drunk History re-told the tale.

It never really disappeared, though. In the year 2000, five girls were given the name. And as of 2020, twelve new baby Zonas arrived. That’s not many – but it’s also not zero.

The name’s sound isn’t quite on-trend right now. After all, Mona is out of favor, too. But there’s another factor that might doom the name Zona. In Hebrew, it means prostitute. Except in more recent years, it can also mean excellent,  in one of those bad-means-good reversals. In any case, it’s the kind of thing that gives parents pause.

That caution aside, the baby name Zona could be the kind of all-but-forgotten gem that daring parents consider reviving. The Zona Gale reference is powerful, and the sound isn’t so out-there in our Zoe, Anna/Elena/Savannah moment.

What do you think of the baby name Zona?

First published on February 9, 2012, this post was revised substantially and re-published on July 20, 2021. 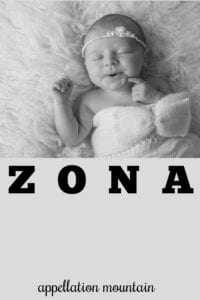