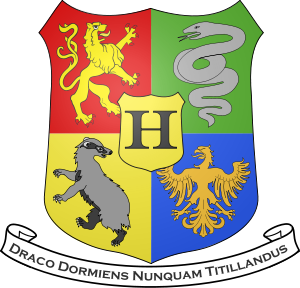 Coat of arms of Hogwarts; Image via Wikipedia

Harry Potter’s classmate Neville Longbottom starts out a bumbler, becomes an object of pity, and eventually grows up to be a hero in his own right.

It’s enough to  make parents consider the underused Neville, and thanks to Liz, he’s our Baby Name of the Day.

Neville sounds quintessentially English, but his roots are French.  His ville is the equivalent of so many names’ ton – city, village, town.  And the nev comes from neu – new.  At least two places in Normandy were called new city, or Néville.  The Normans brought the name to England.

The family that made the name famous weren’t French.  Instead, they were one of the few families of native English origin to hold power after the conquest.  Uhtred and his son Dolfin surface in the early 1100s in North East England in a place called Staindrop.  (Really – but doesn’t it sound like a place name invented for a child’s story?)

The family prospered, and Dolfin’s grandson married the wealthy Anglo-Norman heiress Isabel de Néville.  Within a generation, they’d adopted Neville as their surname. As the fifteenth century began, Ralph Neville had just been created Earl of Westmoreland and married the king’s sister.  They had a good run, amassing titles and property through a series of political intrigues over the next two centuries.

I couldn’t confirm if Arthur Neville Chamberlain was descended from the famous family.  The former British Prime Minister remains controversial – he’s best known for appeasing Nazi Germany, agreeing to let them take a chunk of Czechoslovakia for their very own.  Chamberlain did eventually declare war on Germany following their attack on Poland, but he remains best known for his damaging – if popular and widely supported – delay.  He was succeeded by Winston Churchill, and the rest is history.

Neville has never entered the US Top 1000, but there were other twentieth-century Nevilles, like World War II flying ace Neville Duke.  The best known Nevilles in recent years, however, are probably the Grammy-winning Neville Brothers.  Aaron Neville has also had a successful solo career.

But if Neville catches a parent’s ear, it is probably thanks to the fictional wizard.  Just as the unlikely Luna got a boost from her time at Hogwarts, the series might change the next generation’s perception of Neville.  When he’s first introduced, Neville can do nothing right, despite his pure-blood wizarding parenthood.  Over the course of the seven novels, Neville goes from zero to hero, eventually leading the resistance at Hogwarts and playing a pivotal role in the final battle.

Despite the character’s redeeming qualities, Neville’s sound is not terribly current for boys at the moment.  Still, enduring boys’ names like Daniel and Samuel do end in -l, and the -ev sound is found in 20th century favorites like Evan and Kevin.  Maybe the generation who came of age watching Harry Potter fight the good fight will embrace Neville, but for now, he remains a rarity.