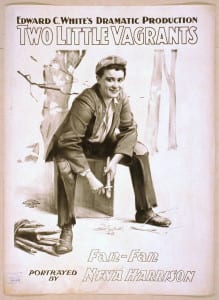 It’s another intriguing smoosh with a modern sound.

Thanks to Anne for suggesting her grandmother’s name as our Baby Name of the Day: Nevabelle.

I hesitated to write about Nevabelle, certain that Anne’s grandmother would be the only one.

Except that wasn’t the case.  Nevabelle never cracked the US Top 1000, but color me surprised by the sheer number of women who answered to Nevabelle, as well as Neva Belle, and even a Nevabella or three.

What’s behind the mash-up?

It just isn’t clear.  What we do know is that Nevabelle was in use from the early twentieth century into the 1930s and maybe even 1940s.  It wasn’t just women, either – race horses and sailing ships were christened Nevabelle, too.

Variant spellings of many of those names abound.  The nev bit was also stylish.  There’s Genevieve and Geneva, too, and just plain Neva was more common than you might guess.

By the 1930s, some of the -bels were waning, but they’d been joined by Clarabelle, Belva, and Belia.  Genevieve, Geneva, and Neva were all still present and accounted for, too.

Given the popularity of the sounds, it is no surprise that Nevabelle enjoyed some use.  And yet I can’t help think that there must be some inspiration.  Given the many possible threads behind Neva – a saint’s name, a Russian river, a disastrous 1835 shipwreck, the Spanish word for snow – there are endless possibilities.

Here’s my theory, though it might be a stretch.

Reverse Nevabelle and you have “La Belle Neva” – which was the name of a vaudeville performer appearing at Koster and Bial’s Music Hall in 1901.  And who knows?  Maybe earlier, too.  Koster & Bial were tremendously successful vaudeville theater operators, remembered for hosting the debut of the Vitascope, an early film projector, back in 1896.  But who was La Belle Neva?  A well-known performer named Neva Harrison seems to have been active at the right time to have appeared at Koster and Bial’s in 1901.  She was also well known for a starring role in a nearly lost play called Two Little Vagrants, with Harrison appearing as a boy called Fan-Fan, and she seems who have been part of the touring company.

Could local papers all over the country have announced a visit from Neva Harrison, La Belle Neva – and would that association be just enough to nudge parents to pair Neva with Belle?

Today Nevabelle is as forgotten as the artistic stylings of Ms. Harrison and most of the theaters where she appeared.  But if you’re lucky enough to find Nevabelle on your family tree, she’s a vintage rarity worth considering.  Even those of us without a tie to Nevabelle might appreciate her quirky, vintage smoosh style.