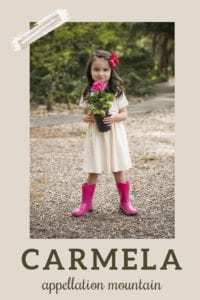 The baby name Carmela appeared in the US Top 1000 most years into the 1970s. But lately it’s faded from use. Could this meaningful choice be ready for revival?

Thanks to Alexandra for suggesting our Baby Name of the Day.

It’s a mountain in Israel, mentioned in the Old Testament. Carmel also refers to an ancient city in Judea. And today, Mount Carmel is a mountain range in Northern Israel, home to the city of Haifa. In Arabic, it’s also known as Mount Mar Elias.

Over the centuries, Mount Carmel has been sought as a place of refuge – and more.

According to the Old Testament, the prophet Elijah’s miraculous fire burned on the mountain. He challenged the pagan priests. If their god was so great, surely he could light a fire? They failed, but flames fell from the sky and lit Elijah’s fire.

It served as a strategic location in battle. From the fifteenth century BC, right up through the first World War, various struggles have played out in the hills.

So how does the baby name Carmela develop from this historic mountain?

One of the Blessed Virgin Mary’s many titles is Our Lady of Mount Carmel. She serves as patron to the Carmelites, a religious order founded on the mountain sometime during the medieval Crusades.

The founders chose the location because of Elijah’s legendary demonstration of faith. The original group lived as hermits on the mountainside.

They weren’t able to remain in the Holy Land, however, and their order instead established houses across Europe.

That spread the name – and the familiarity with Our Lady of Mount Carmel – as the order expanded.

Catholic families embraced the name, particularly in Italy and Spain, in several forms. It’s sometimes given in combination with Maria or Mary. People of faith consider it a Marian name, one that honors the saint.

In Latin, Carmen is also the word for song. Bizet’s opera cemented that connection. Now Carmen feels like a separate choice with a different set of associations. But chances are that it, too, originated as part of the baby name Carmela’s history.

Carmel – without the final a – might be a little close to caramel. The sticky sweet dessert is unrelated to the place name.

But Carmela sounds like a girl’s given name, and it has flourished.

It appeared in the US Top 1000 every year from 1888 until 1976. That tracks with the increasing number of Italian immigrants coming to the US. There’s a big bump in 1887, and the numbers stayed high into the early 1920s. It peaked in the year 1923, with 586 girls receiving the baby name Carmela.

That made Carmela a logical pick for the wife of television’s most famous mob boss, Tony Soprano.

Edie Falco won multiple Emmy Awards for her portrayal of Tony’s conflicted wife. She’s Italian – obviously – and she’s Tony’s high school sweetheart. That puts her birth somewhere around 1960. While it wasn’t peak-Carmela, the name was still in steady use.

The choice may also be a nod to another famous fictional crime family: the Corleones. In The Godfather, we meet Carmela Corleone, the Sicilian born wife of Vito, and mom to Sonny, Fredo, Michael, and Connie. The novel was published in 1969, and the first movie followed in 1972. Sequels followed.

On a different note, Ay Carmela was a folk song famous during the Spanish Civil War in the 1930s. It traces its roots to the early 1800s, when Spanish guerrillas fought to resist Napoleon during the Peninsular War.

A handful of other high-profile Spanish language uses suggest it was equally well-known in both romance languages.

Today, the name feels vintage. It’s no nineteenth century antique, but the baby name Carmela has acquired the patina of a midcentury find.

Soundwise, Carmela shares something in common with other -ella enders, like Gabriella, Isabella, and even names like Camila. But it also brings to mind the names with hard consonants: Norma, Gretchen, Gertrude, Mildred. The “carm” sound is less stylish today, offsetting the -ela ending.

All of that said, it might be the perfect combination – a name that stands out just enough to capture attention, but still fits in nicely.

Plus, it’s got meaning galore, and a lot of story behind it, too.

Do you think the baby name Carmela? Would you consider it for a daughter?