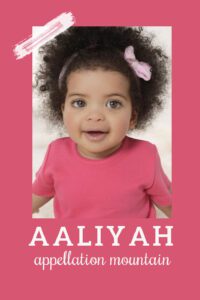 Thanks to Alia for suggesting our Baby Name of the Day.

We all recognize Ali as Arabic. The meaning – lofty or sublime – is familiar to many, too.

After all, it’s the name Aladdin adopts in the Disney movie. Cassius Clay became Muhammad Ali.

As Arabic – and Muslim – names go, Ali is both immediately accessible in English and broadly familiar.

The double A spelling looks a bit unusual in English, but it’s a legit transcription from the Arabic alphabet.

That means that feminine forms of Aali and Ali include the baby name Aaliyah, as well as everything from Alia to Aaliya and beyond.

The Hebrew name Aliya shares a similar meaning – to climb or ascend.

The word can also refer to Jewish families immigrating to Israel.

Of course, Arabic and Hebrew are both Semitic languages, and share many words.

It’s worth noting that Alia might have other origins. Alia appears in the US name data as early as the 1910s.

It’s occasionally listed as a form of Ella.

And it’s easy to imagine someone inventing Alia, either as a shortening of a longer name, or just a spin on Julia, Celia, Amelia, and so many other -lia names.

There’s also Alea and Aleah, which both debuted in the US data way back in 1961. Again, they share multiple possible origins – including a creative twist on Leah and similar names.

The baby name Aaliyah – along with most alternate spellings – first surfaced in the 1970s.

Even Alia and Alea rose during the decade. It was a wave! But multiple spellings made it hard to spot.

Other spellings that first appear during or after the 1970s include:

The 1970s saw the emergence of a new cluster of names. They represented African-American families, eager to reclaim and celebrate their roots. Many – like Muhammad Ali – embraced Islam. Ali formally converted. But other families embraced the style and the names without any specific faith driving their choices.

As for the most popular spelling?

And that’s almost all down to a single, extraordinary young woman.

Born in 1979, the singer Aaliyah Haughton was one of just 38 girls to receive that particular spelling in her year of birth.

But in 1994, Miss Haughton dropped her last name and recorded a debut album as just Aaliyah. Age Ain’t Nothing But a Number made the fourteen year old an overnight sensation. Her debut single “Back & Forth” was a hit.

By the year 2000, Aaliyah was taking on film roles. She co-starred in Romeo Must Die. A year later, she played vampire ruler Akasha in Queen of the Damned.

And then tragedy struck.

After recording a video for her new single in the Bahamas, Aaliyah and her team boarded a flight to Miami. It crashed shortly after take-off, with no survivors.

But part of what happened is more complex. With so many spellings on the rise, Aaliyah’s success, and premature death, helped cement her spelling as the most common one.

And why not? Parents encountered Aaliyah on CD covers and MTV video credits. Now it was all over the headlines, too. The singer paired a rising name with a single, now obvious, spelling.

A flurry of posthumous awards kept the baby name Aaliyah in the spotlight.

It’s not just that parents grew up knowing the singer’s name.

The baby name Aaliyah also lines up with what so many parents prefer in names now.

It’s flowing and liquid, vowel-forward without lots of consonants to trip up the tongue.

And it’s global, a name that feels non-Western but still broadly familiar and accessible.

If the singer briefly spotlighted one preferred spelling for the baby name Aaliyah, that hasn’t lasted long.

Now a handful of spellings rank in the US Top 1000, with similar names – Alaya, Alina, and Aliana – also in favor.

So are names like Jaliyah, Maliyah, and Kaliyah, all current Top 1000 picks.

Overall, the baby name Aaliyah has been wildly successful, on the back of a talented young woman and her brief, but powerful, legacy. Over the years, it’s simply become the sound of names for our daughters in this age.

What do you think of the baby name Aaliyah? 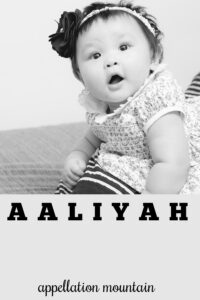