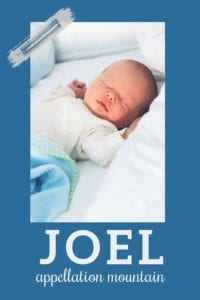 This short name belongs to an Old Testament prophet.

It means “Yahweh is God,” and implies that the bearer is one who worships God. That makes it a faith-filled name, and yet it feels relatively secular in our age of Elijah and Isaiah.

Despite the similar sound, it’s not related to Joseph.

The historical figure would’ve live around the ninth century BCE, but that’s open to discussion. In any event, the baby name Joel qualifies as ancient.

The surname likely comes from a Celtic given name – no relation to the Old Testament figure.

The musician scored his first hits in the early 1970s, and continued recording well into the 1990s. He still tours and performs today. Over the years, he’s racked up 23 Grammy nominations, including five wins, and he’s been inducted into the Rock and Roll Hall of Fame.

Still, it’s such a common first name that calling your kiddo Joel isn’t quite like choosing Lennon or Hendrix.

Like the singer himself, the baby name Joel feels tough to pin down to any single era.

TOM and ROB and JIM

In fact, the baby name Joel has become something of an everyman name.

Tom Cruise played Joel Goodson in 1983’s Risky Business, the movie that made Cruise – but not Joel – a household name.

A decade after that, Jim Carrey won critical acclaim as Joel Barish in Eternal Sunshine of the Spotless Mind. Kate Winslet played Clementine, a name that owes its early rise to the movie. But again, Joel held steady.

That sounds like a rise and fall, but actually, it’s ranked in the Top 200 every year since 1933.

Besides the singer-songwriter and the fictional characters, you can find Joel in nearly any field of endeavor.

Joel, along with brother Ethan, are the famous movie-making Coen Brothers.

Oscar- and Tony-winning actor Joel Grey is just one of several well-known actors by the name.

Good Charlotte frontman Joel Madden is another familiar bearer of the name.

All of this makes the baby name Joel is more like Malcolm or Jonathan – steady, tough to pin to a particular decade, and impossible to pigeonhole.

It’s not nearly as evergreen as Joseph, and yet it’s impossible to call Joel anything but a classic.

We do love J names for boys. Joel has shared the Top 100 with Jeffrey and Jerry, Joshua and Justin.

The baby name Joel eludes easy categorization – but that might be a good thing for parents after a trend-resistant, traditional, but not too often heard name for a son.

What do you think of the baby name Joel? Does it strike you as belonging to a particular decade?