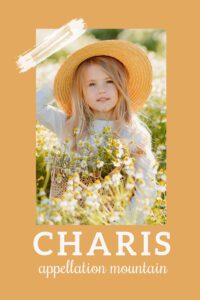 The baby name Charis numbers among the rarest of possibilities for a daughter.

Thanks to Lazaro for suggesting our Baby Name of the Day.

That seems obvious. The trick comes with the Ch. Instead of Charlotte or Charity, the “ch” in Charis makes a K sound.

That puts Charis in the company of Welsh name Carys, though there’s no relation.

In Greek, Charis simply translates to kindness or grace.

Masculine form Chares was worn by a number of notables in the ancient world.

While Chares never made it into English, Charis made the leap.

Edmund Spencer used the elaborated Charissa for a character in his epic – and name-packed – poem The Faerie Queene in 1590. The baby name Charis – as well as Charissa – probably filtered into occasional use in the years that followed.

But it’s not just a name from the distant past or a literary rarity. It also belongs to a fascinating goddess.

A trio of goddesses in Greek myth preside over charm and beauty, creativity and fertility; and the natural world, at least as it relates to those qualities.

Like many a myth, the Charites evolved over time and varied based on place. Hesiod listed three: Aglaea (shining), Euphrosyne (joy), and Thalia (blooming). Aglaea is the baby of the family; she’s also sometimes called Charis.

But Charis might also be simply a singular form of the group name.

The Roman called them the Gratiae – the Graces.

Tales often make Charis the wife of Hephaestus, the immortal blacksmith to the gods.

As a group, the Graces inspired great works of art. They also bestowed their gifts upon young women, inspiring them to emulate their best qualities.

FROM GODDESS TO VIRTUE

Ancient writers, then, knew Charis as a name and a concept.

In the New Testament, it becomes more of a virtue, referring to God’s merciful grace. St. Augustine used the concept in his writings, too.

Over the centuries, the concept of charism emerged – a spiritual gift. In narrow terms, it’s given to all Christians. But faith traditions understand it differently. It may also refer to specific gifts given to directly to individual believers, like the ability to speak in tongues.

That might transform the baby name Charis from ancient goddess name to deeply significant virtue – and perhaps religious – choices.

Charis is also the root of a more secular concept. Charisma refers to charm. It’s a synonym for enchanting or alluring.

Or maybe it’s not secular, but much closer to the mythological meaning.

Like the baby name Charis, Charisma is sometimes heard as a given name.

You might know it best, however, as an Avon fragrance. While it’s no longer listed in their catalog, it was a fixture for many decades.

CHARIS in the WILD

The baby name Charis surfaces in a handful of places. It’s a character name in Georgette Heyer’s 1965 romance Frederica, where the name belongs to the beautiful younger sister.

And it’s big in the natural world. Plants include Ammocharis – from sub-Saharan Africa – and Hydrocharis, also known as the water poppy.

There’s a genus of butterfly known as Charis, too. They’re found mainly in Central and South America.

So while you might hear the baby name Charis in the wild, it’s much tougher to spot on an actual child.

And while it might be slightly more popular in the UK, it remains rare throughout the English-speaking world.

Charissa – and Carissa – have fared slightly better. And Charisma, too, has seen higher use – thanks to both the Avon perfume and actor Charisma Carpenter, named for the fragrance.

But overall, the baby name Charis – as well as re-spellings like Karis and the unrelated Welsh Carys – remain nicely rare in the US.

If you’re looking for an unconventional, tailored choice for a daughter, one rich with meaning, Charis deserves a closer look.

What do you think of the baby name Charis? 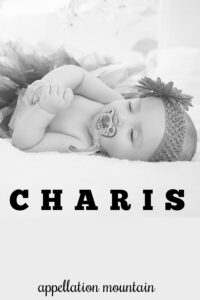