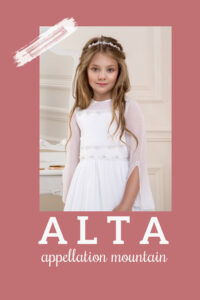 The baby name Alta is brief, upbeat, gently vintage, and has a great meaning, too.

Thanks to Meghan for suggesting one from her family tree as our Baby Name of the Day.

If you know your Olympic history, the original motto is Citius, Altius, Fortius – Faster, Higher, Stronger.

That seems straightforward, but it’s worth noting that ancient Romans did not name their daughters Alta … nor did they name their sons Alto.

So how did this name come into use?

The meaning of the name Alta isn’t just as simple as the dictionary translation.

Alta is also the root of altar.

But it’s a spiritual name for another reason.

The Virgin Mary is sometimes known as Our Lady of Altagracia. Or Nuestra Señora de la Altagracia in Spanish. It refers to a sixteenth century portrait of the Virgin Mary, kept in a basilica in the Dominican Republic.

Nuestra Señora de la Altagracia is the patron saint of the Dominican Republic, and her feast day is celebrated on January 21st, to coincide with a significant victory over the French in 1690.

Nearly any Marian name – a name associated with one of the Virgin Mary’s titles – will find some use among Catholic families. That’s particularly true in Spanish-speaking countries, where they’re often given in combination with Maria. Pilar, Consuelo, Dolores, Carmel, and Luz all claim Marian roots.

So the girl’s name Alta might simply be an abbreviation of Altagracia.

And yet, the numbers don’t necessarily suggest a Marian origin. Spanish names were common – even fashionable – at the turn of the twentieth century, Juana, Juanita, and Inez ranked in the US Top 1000. But Altagracia doesn’t appear in the US data at all until the year 1915.

In 1880, the very first year for the which the US Social Security Administration reports data, 91 girls received the name Alta.

That put the name comfortably in the Top 200, a rank it would maintain until 1910.

It fell in use throughout the twentieth century, and as of 2021, was given to just 31 girls.

Add a syllable, and Alida and Althea appear, too.

Longer names, like Alberta and Aleta, could easily contract to Alta, too.

Could the baby name Alta simply be an invention, based on stylish sounds from the era?

But as a surname, it means old, with German roots.

While it doesn’t seem terribly likely that the first name Alta owes its use to this surname, it’s not impossible. After all, a handful of boys received the name Alta over the years, and many a unisex  name started out in the last name spot.

Famous figures answering to Alta are quite rare.

One is poet and publisher Alta Gerrey, founder of Shameless Hussy Press in 1969.

Way before California became the 31st of the United States in the year 1850, territories belonged to the Spanish Empire, and later to Mexico. Nueva California, later renamed Alta California, was among them.

With a capital at Monterey, the province existed for over three decades.

No surprise, then, that Alta still dots the map in California and neighboring states.

But it occurs elsewhere, in Indiana and Illinois; Canada and Scandinavia.

Some are clearly named to reflect a place’s lofty elevation.

Others take us right back to baby girl names. Alta Lake in Washington is now at the heart of a state park. It was named for the daughter of a local merchant. That was around the year 1900, which tracks with the name’s popularity.

The pronunciation of the name Alta might give some pause. Americans tend to say T like D, at least in many accents, so it could easily become Alda.

That hurdle aside, there are many reasons to embrace this antique rarity.

The meaning – both spiritual and secular – is overwhelmingly positive. And the spare, straightforward sound has all the appeal of chart-toppers like Emma and Mila.

If you’re after a name that’s rare, feminine, and elegant, the baby name Alta might deserve a second look.

What do you think of the baby name Alta? 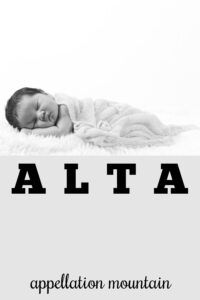