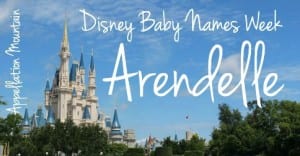 It’s a Disney place name extraordinaire, and if you look hard enough, you might just find it on a map.

Thanks to Jennie for suggesting our Disney Baby Name of the Day: Arendelle.

Quick, where does The Little Mermaid take place? I’d guess Denmark, but that’s thanks to the traditional story, not the movie itself.

Beauty and the Beast is set in France – the singing candlestick tells us that. But it’s tough to pin down an exact location.

We know the countries and time periods for Pocahontas and Mulan. Tiana reigns in New Orleans, and Merida is from the Scottish Highlands. The look of those locations was dictated by reality.

Frozen’s story was inspired by a traditional fairy tale by Danish writer Hans Christian Andersen, The Snow Queen. Disney could have created a fictional kingdom that was broadly Scandinavian.

Instead, Arendelle is clearly inspired by Norway.

So much so that Epcot’s Norwegian Pavilion is about to get a makeover to turn its Maelstrom ride into an Anna-Elsa-and-Olaf extravaganza. Adventures by Disney takes visitors to the Norwegian locations that inspired the movie’s animators.

And so Arendelle is different from the places other Disney princesses call home – a place that is fictional and real at the same time.

Arendelle: On the Map Adventures by Disney takes guests to Bryggen, a UNESCO World Heritage Site. Bryggen means “the wharf.” It’s part of modern-day Bergen, which remains a major center for shipping and other maritime businesses. The city was established way back in 1070, on Norway’s west coast.

Back in the twelfth century, Bergen was briefly the capital of Norway, and saw a king crowned in its cathedral. More recently, it’s the site that Disney imagineers visited as inspiration for Elsa’s kingdom.

So that’s the look of the movie, but how about the name?

Arendelle may have been borrowed from a city on Norway’s southern coast. Arendal was founded in the 1500s, though it wasn’t officially incorporated for another two hundred years. The name probably comes from arn – eagle – plus a word meaning valley or dale. Like Bergen, Arendal is also a port city.

Arendelle: By the Numbers 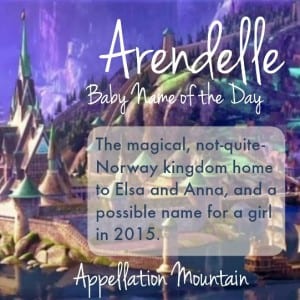 Nancy is tracking Arendelle as part of her annual Pop Culture Baby Name Game. Because the movie debuted late in 2013, it seemed likely that the first year we’d see data on Arendelle was 2014. But so far, it seems like Arendelle isn’t being used as a given name.

And yet, I think it could work:

Overall, Arendelle is a fanciful name. If Bay is too subtle, Arendelle is all Mouse Ears and magic. And yet, it has an appealing, romantic sound and might make a gorgeous middle – or a truly daring first.

What’s your favorite Frozen baby name? Would you consider Arendelle as a child’s name?