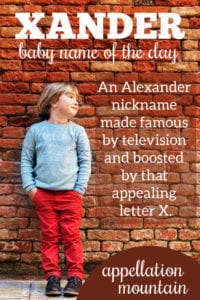 Call Xander a modern spin on an ancient name.

Thanks to Lex for suggesting our Baby Name of the Day.

For generations, Alexander shortened to Alex. Mostly. Possible nicknames abound, but Alex became the default choice in the English-speaking world.

After all, Americans tend to form nicknames by lopping off everything after the first syllable or two. Maybe we’ll add a -y while we’re at it.

That’s changed in recent years. The #1 name in the US for 2017 and 2018 is Liam, short for William. Actor Topher Grace was born Christopher. And, of course, there’s Xander.

The name’s first big boost came courtesy of namer extraordinaire, Joss Whedon. Whedon had invented Buffy the Vampire Slayer and made a 1992 movie about his cheerleader-turned-enemy-of-evil. It wasn’t exactly a hit, but in 1997, Whedon had the chance to re-invent his unlikely heroine for the small screen.

This time Buffy caught on. She and her creatively named sidekicks battled the forces of darkness in a California town with dark secrets. In the first episode, we met Willow, a computer genius who would turn out to be a powerful witch. And then there was ordinary Joe, Xander.

We’d eventually learn that his full name was, in fact, Alexander. But he was never called Alex, and only rarely referred to by his full name.

What explains the jump? This time it’s not about Buffy.

Here’s the story: Cage was an extreme sports athlete – hence the Xs – with a shady past. The US government recruits him to infiltrate a Russian terrorist group because, well … it’s an action adventure movie, and you’ll just need to suspend some disbelief.

This spelling almost certainly derives from Xander, but you could argue for other origins. First, it occurs as a surname. But it’s almost always traced back to Alexander again. Unless it comes from the word zant – tooth. In that case, it referred to a dentist. (Well, what passed for a dentist back when surnames were new.)

There’s even a 1925 silent film from MGM called Zander the Great, about a boy named Zander who heads West to search for his missing father.

It’s easy to argue that both spellings are valid, though the X spelling outpaces the Z version by around a hundred spots on the popularity charts today. Xander comes in at #171; Zander trails at #259. But both make for sweet spot names, familiar but not too common.

If you’re after a modern, mainstream name with traditional roots, and if high value Scrabble letters appeal to you, Xander could be a name to consider.

What do you think of Xander? Do you prefer it with an X or a Z? 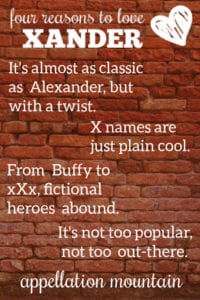