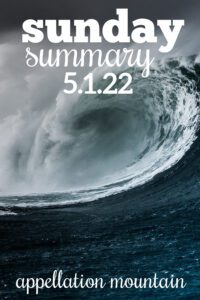 The marvelous month of May is here!

For American readers, that means Mother’s Day is coming up next Sunday, May 8th.

Which means that we’re less than a week away from ALL the new most popular names data, as released by the US Social Security Administration.

Looking back at last year’s data release, these were all the names that entered the US Top 1000:

And these are my guesses for names that we might see on that list this time around.

It’s my favorite part of the data release every year. Why? Because it’s relatively easy to see which names are closing in on the US Top 100, or even the Top Ten. But the movement outside of the Top 1000 – beyond the regularly published and exhaustively analyzed list – is often where the most interesting trends are developing. It’s like the depths of the ocean, miles before the waves crash to shore.

Speaking of trends, Nameberry has some interesting analysis based on their most-viewed names data. While viewed names are sometimes just that – names that we’re wondering about – some of these will surely translate to actual spikes in use.

For more lists, see British Baby Names’ round-up of the new Northern Ireland Top 100. For every Sophia, there’s a Fiadh, and for every Ethan, a Daithi.

We know that dogs often share popular kid names, but how ’bout these names we borrowed from dogs? It sounds a little crazy, but these are really great names.

This is a classic! Nancy sleuthed out the origins of the name Kasara. It’s a wild tale.

Confession: I’m not sure I’ve ever seen Fiddler on the Roof. Scenes, yes. But beginning to end? Probably not. But this look at Tevye’s daughters’ names makes me think it’s time to fix that.

Can’t get enough name news? Sign up for Tuesday’s newsletter: 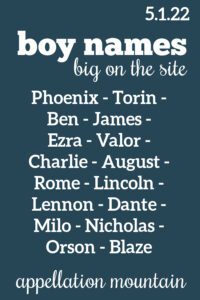 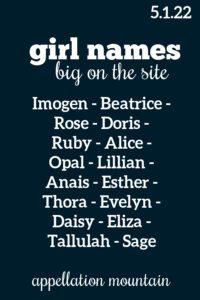