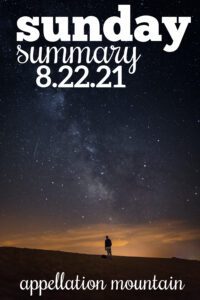 You might have heard that Scarlett Johannson named her new son Cosmo. Celebrity baby names often grad headlines, then fade. (When’s the last time you met a kid called Pilot, Apple, or Suri?) But Cosmo feels like it points to more than one trend.

The obvious one, of course, is boy names ending with o. As Theo, Leo, Milo, and Arlo become more + more mainstream, unusual o-enders feel inevitable. I’m busy listening for Horatio, Thoreau, and Tycho. Cosmo, rare in use but long familiar as a first, feels relatively tame.

But I’m also interested another trend, one long in coming: night sky names. Stella and Luna dominate on the girls’ side, but they’re not alone.

And while we tend to talk about mythological names, they’re nearly all echoed in the stars: Orion and Lyra. Others, like Archer and Leo, point to constellations, even if that’s not our first thought. Nova means new, but also refers to a new star.

Are we all looking to the heavens when we name this generation?

Maybe. After all, the night sky feels equal parts mysterious and ambitious. Star Trek has long told us that it’s the final frontier. Because it’s so vast, space-inspired names feel equal parts ambitious and humble. They’re names big enough to encompass any achievement, while also reminding us of how very small we are in this enormous universe.

What do you think? Are night sky-inspired names on your list?

I loved Duana’s take on Cosmo … and on celebrity baby names + bigger cultural trends in general.

Okay, one more celebrity baby name announcement. Teresa Palmer, of Discovery of Witches fame, welcomed a daughter named Prairie Moon. Her older siblings include Forest, Bodhi, and Poet, so it’s not as if their short list included Katherine or Amelia. (Probably.) I love it for them, but generally, I just plain love the name Prairie. Nevermind the muppet.

Kelsey became Kelce … and at least sometimes masculine … thanks to a pair of football-playing brothers, both in the NFL. It’s the last name of Travis Kelce, of the Kansas City Chiefs, and Jason Kelce, of the Philadelphia Eagles. But what really caught my eye? In April 2020, Netflix teen drama Outer Banks gave the name to a name to a male character, too. So now there’s more than one way for future parents to trip over the name … and more than one reason to imagine that it might read masculine.

We all know that US Social Security Administration counts Sean and Shawn, Katherine, Catherine, and Kathryn as separate names. And we all know that skews popularity data in the real world. But Nameberry tallied up the impact, and there are some interesting outcomes – especially on the girls’ side.

Can’t get enough name talk? Sign up for my Tuesday newsletter, and get a second dose of all things name-related, direct to your inbox:

That’s all for this week. Thank you for reading + thinking of you! 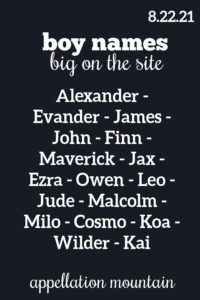 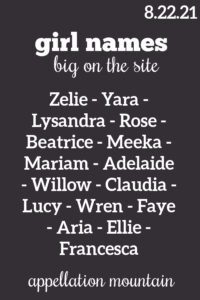