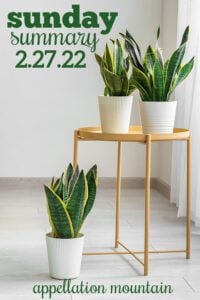 Do you name your houseplants?

But then again, my track record for keeping houseplants alive is … not good. I married a man with a green thumb and no sense of restraint. So a handful of plants, purchased or acquired while they were modestly-sized, are now threatening to take over the house.

They’re not really mine to name, I suppose.

But now I sort of want to start, inspired by this Apartment Therapy post. Not only does she name her houseplants, but she names them after lesser-known heroes of Black History.

Also, it would require me to keep plants alive, so probably not gonna happen.

But I suggest it in case your favorite cache of names could be put to good use on the green and leafy.

On a similar note, I checked out the new Amazon series Reacher mostly because of a name. The small-town cop who partners with the books-turned-movie-turned-series’ hero is a woman named Roscoe. There’s no satisfactory explanation in the show for it – though it’s addressed, briefly – so I’m wondering if the books give a reason?

If you win the Super Bowl and your wife delivers a baby on that exact same day? Yes, Champ is probably the only logical name you can give to your son. Van Jefferson and wife Samaria are also parents to daughter Bella.

This story isn’t about names … but the names! Thanks to Meredith for spotting that twins Scarlett and Redford have the last name Bull. How’s that for some high-octane naming?

When identical twins marry identical twins and have babies at the same time, they’re … cousins? Brothers? Nope. They’re quaternary twins. But what caught my eye were the boys’ rather twin-like names: Jax and Jett.

There’s no other state quite like Alaska, and Alaskan names reflect that. Welcome to the world, Denali and Gunnar and Bristol and Aurora.

Can’t get enough name chatter? Sign up for the weekly newsletter, delivered every Tuesday: