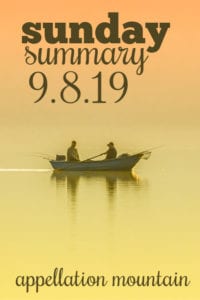 I’m reading Dani Shapiro’s memoir Inheritance. It’s about discovering a family secret through DNA testing, and how it unmoors her – but also explains so much about her childhood.

While it’s not central to the story, the part about her given name leapt out at me:

Daneile. Pronounced Da-neel. It was a name that called attention to itself – that required an explanation. It stopped people. I had to spell it out for official documents, or when making travel reservations, and still, more often than not, airplane tickets would arrive for Danielle, Danelle, Danyelle, Daniele.

She goes on to add that she never thought of herself as Daneile. Instead:

All my life … I was asked if Dani was my real name. Yes, I would say. It took too much out of me to explain.

The author legally changed her name to just Dani as an adult.

It’s the kind of story that people cite when they argue against unusual names. And I get it. It’s frustrating to spell your name every. single. time. To have others ask about it. To feel like you always stand out, even at moments when it would be far more appealing to fade into the background.

Except I also know dozens upon dozens of people who love their unconventional names. They shrug off spelling and pronunciation hassles. They love to explain that they share their name with a grandmother, or a literary character, or that their hippie parents really were living on a commune when they chose the name Starshine. They see it as an asset, a conversation starter, a part of their identities.

My own kids are split. One has a very ordinary name and often tells me he’s grateful I didn’t get my way. (I still think he’d have made a great Gideon or Dante.) And there’s my daughter, with the complicated given name, and the wait-what nickname that isn’t even spelled “right.” (It’s Clio-with-an-i. Not Cleo. Not Chloe.) She’s equally pleased by all the rich and involved story of her name.

So as a parent, you can consider the potential pitfalls. But it’s impossible to know whether your child will adore the name … or wish you’d played it safer. As with so many things in parenting, it’s a leap of faith.

I’m fascinated by names that come to be words. At a moment when we’re naming our children River and Reign and Harmony and Sky, it’s easy to forget that it works the opposite way, too. Not so long ago, Abigail was another word for a servant. The same became true for Bridget. But here’s one that took me by surprise: Stan, meaning an obsessed fan, as in the Eminem song about, well, exactly that. It’s a noun – you can be a Stan – as well as a verb. I stan baby names.

How’s this for a sibset: brothers Geronimo, Artemis, and Galileo, plus daughters Beatrix and Sable. Dad is Alex James, the bassist of the band Blur; mom is Claire Neate, a music video producer. Thanks to Kelley for the tip! And if you haven’t thought about Blur since “Parklife” or so, well … Alex James has semi-retired to a farm where he makes artisanal cheeses. Sounds about right to me.

Did you automatically give your children their father’s last name? We did. (I mean, it’s my last name, too.) But I’m intrigued by the range of possibilities. And it’s worth noting – as this couple did – that sometimes it just plain matters more to hand down the mother’s surname. This one’s in the Washington Post; it may be behind a paywall.

While we’re in the UK … a birth announcement for Agatha Rose, sister to Beatrix Daisy. I love seeing Agatha in use, and I wonder why it’s not catching on. I’d call Agatha one of the logical successors to Abigail, along with Harriet, Winifred, and the rest of this list.

Now that we have data on the most popular children’s names in the UK, I have my list of names that we Americans ought to steal. Top on my list: Harriet! It’s in the Top 100 there, not even in the Top 1000 here. Yes, you read that right! 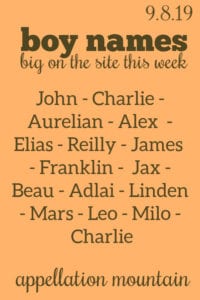 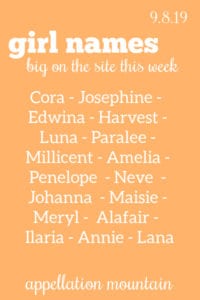 Image by analogicus from Pixabay