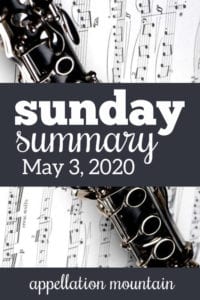 Years ago, I met a woman named Amy Erica. Sure enough, she was due on the Fourth of July. (She arrived a few days late, but her parents stuck with her patriotic, almost-America name anyhow.)

And then, yesterday, I was looking at Anna Mae and thinking how much it sounded like anime.

So let’s start this Sunday Summary with a challenge: can you come up with another innocent word that breaks down into two (or more) ordinary names? Or ordinary names that kinda-sorta-almost sound like a word?

We’re not looking for Amy Schumer-like fails. We’re looking for name combinations that result in, as Bob Ross would say, happy accidents.

Okay, while you think about that, let’s move on to all sorts of name news!

This isn’t specifically name-related, but I thought this New York Times (paywall) article might appeal to many of you. Anastasia Berg argues that there’s no perfect time to start a family, so why not now? Berg and her fiance have postponed their June wedding and are facing professional uncertainty. And honestly? She sounds like a planner, one who acknowledges that it is always easy to find reasons to delay. But I love her ultimate conclusion: “To decide to have children is, after all, to take a stance on one of the most fundamental questions a person can ask: Is human life, despite all the suffering and uncertainty it entails, worth living?”

Wise words from Pam Redmond writing for Good Housekeeping. I particularly like her point about popularity. Parents report regretting their child’s name because it’s too popular … but kids often don’t mind sharing. I think that’s even more true these days, when you might be one of two in your class, but you’re less likely to be one of five.

An important reminder from Swistle: cool is in the eye of the beholder. You can’t name your kid into anything. (My own experience as a parent bears this out time and time again: our children surprise and confuse us.) And so her wisdom is important here: “For MANY names on the spectrum, the name is a stretchy garment that fits a great variety of wearers.”

Nancy shares the baby name data from Iowa, including all the rarities at the bottom of the list. Bergamot, Tracieux, Thwin, Shelter. Some amazing choices I’d consider, along with some rarities that make me wonder … and a few that I can’t quite wrap my head around.

If you speak two languages, do you have two names? A handful of readers responded that yes, they do indeed switch names depending on their language – and I’ve heard this from others, too. Still, I was intrigued by this post on Design Mom. Now that they’re living in France, her youngest daughter is going by Flora, instead of the middle name they’d always used for her, June. It comes down to how the two names sound in the different languages, which makes all the sense in the world.

That’s all for now. As always, thank you for reading. See you back here soon! 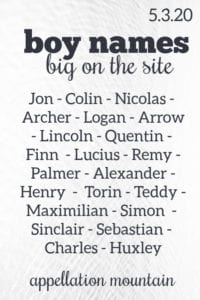 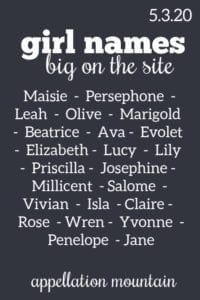 Image by Bob McEvoy from Pixabay