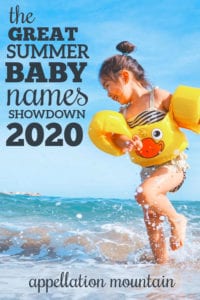 Your votes have been tallied, and we have a pair of winners!

While the Summer Baby Names Showdown takes place every summer, this year is a little different. (That’s the motto for 2020, right?!) Normally, we pick from our favorite of the names returning or debuting in the US Top 1000, a data set released in May.

Except this year, we had no new names data.

But we did have a decades’ worth of winners from another annual Appellation Mountain tradition: March Madness Baby Names.

Over the years, some of you have suggested we have a contest among champions. And so that’s exactly what we did!

The names that have won over the last decade are as follows:

As for that *? It’s no mistake. Up until 2015, winning names could compete again the following year. But after Cora won two years in a row, we decided that all champions had to retire.

Until now, of course.

Because the all-star showdown has brought us the following victors.

With just over 54% of the vote, Eliza sailed past Sylvie.

And, in an even narrower match-up, Theodore garnered almost 52% of the vote, to win over Arthur.

Both names belong to a category that feels like an oxymoron at first: Trending Classics. Or maybe Stylish Classics is the better title?

We all recognize classic boy names. And, while they’re a little harder to pin down, classic girl names mostly feel obvious, too.

At any given time, some of these are rising in use. And others? Despite having similar roots and equally long histories of use, they’re just not.

Some credit goes to pop culture. Eliza’s Hamilton tie-in feels powerful. And much of it comes down to sound, like the lively ‘o’ ending of Theodore nickname Theo.

But it also speaks to the process of narrowing up. Every year, rarities like Phryne and Endeavour start out in the early rounds of March Madness Baby Names. But they never make it much past the opening contest or two. That’s because when we all have to agree, we tend to favor the same names – and they tend to be more familiar favorites.

And so Eliza and Theodore go down in Appellation Mountain history as the winningest of the baby names, the champions of champions – the names on which we all can agree.

Thank you so much for voting with us this month!

Stay tuned for future contests … the next one is traditionally in October, but it’s such a weird year that all I can say is watch this space!