Love Sophia, but wish it wasn’t the #1 name in the US? Intrigued by Seraphina, but worried you’ll feel like a Garner-Affleck copycat? Here’s a possibility worth considering.

Thanks to WF for suggesting Sophonisba as our Baby Name of the Day.

With names like Olivia and Isabella in the US Top Ten, you can’t really argue that Sophonisba is too long.  It’s just four syllables: sah fon EES bah.

Say it five times, and it starts to sound comfortable – and rather attractive, too. The story behind Sophonisba was once widely told – right up there with Cleopatra.

She was a Carthaginian noblewoman, the daughter of Hasdrubal. The princess had it all – youth, good looks, and a dynastic marriage to a husband who loved her.

It was the Second Punic War.  Sophonisba’s engagement had already been broken once as battles were won and lost and alliances shifted.  Sometime around 200 BC, Sophonisba and King Massinissa of Numidia were married.

And that’s where it all went whopper-jawed.

Massinissa was an ally of Rome.  Rome, under the command of Scipio, had just defeated Sophonisba’s dad and her former betrothed.  Custom dictated that the princess of the defeated be sent to Rome to appear in the triumphal parade, subject to the jeers of the Roman populace.

What to do? Massinissa feared losing his ally. And so, he offered his bride the option of humiliation or suicide, in the form of cup of poison.

Sophonisba drank, and her legend was assured.

There are many accounts of the story amongst the ancients, and she would be a favorite for centuries. Petrarch wrote about her in the fourteenth century. It was perfect subject matter for opera and art.

As for her name, the original was probably Saphanba’al – sheltered by Ba’al, or God – though Sophonisba lived two hundred years BC, so her god was decidedly pre-Christian.  And yet, it reminds me of Elizabeth, phrases meant to protect their bearers and glorify their beliefs.

Sophonisba: More than One

Even though her story isn’t widely known today, it was so popular over the centuries that it is no surprise to find others by the name, including: 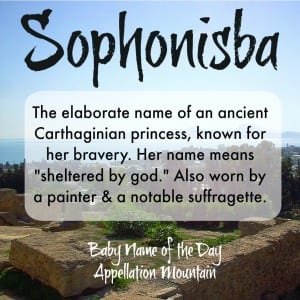 There’s only one conclusion to draw about this name: it’s strong and complex.  The women who have worn it are admirable, from the ancient princess who chose death over dishonor, to the Renaissance painter and nineteenth century reformer who challenged gender roles and achieved much in their professional lives.

But even at a moment where we’ve embraced long names, Sophonisba is a toughie.  We’ve neglected the story of the original figure – and what kindergartener wants to explain that she was named for an ancient princess who died too young?

Still, with the possibility of answering to Sophie, Sophonisba deserves a place in the everyday-nickname, super-surprising-formal-name Hall of Fame.

If you’re a truly daring namer, Sophonisba is one to consider.

What do you think of Sophonisba? Too much name to consider? Or an ancient name ready for consideration in 2015?