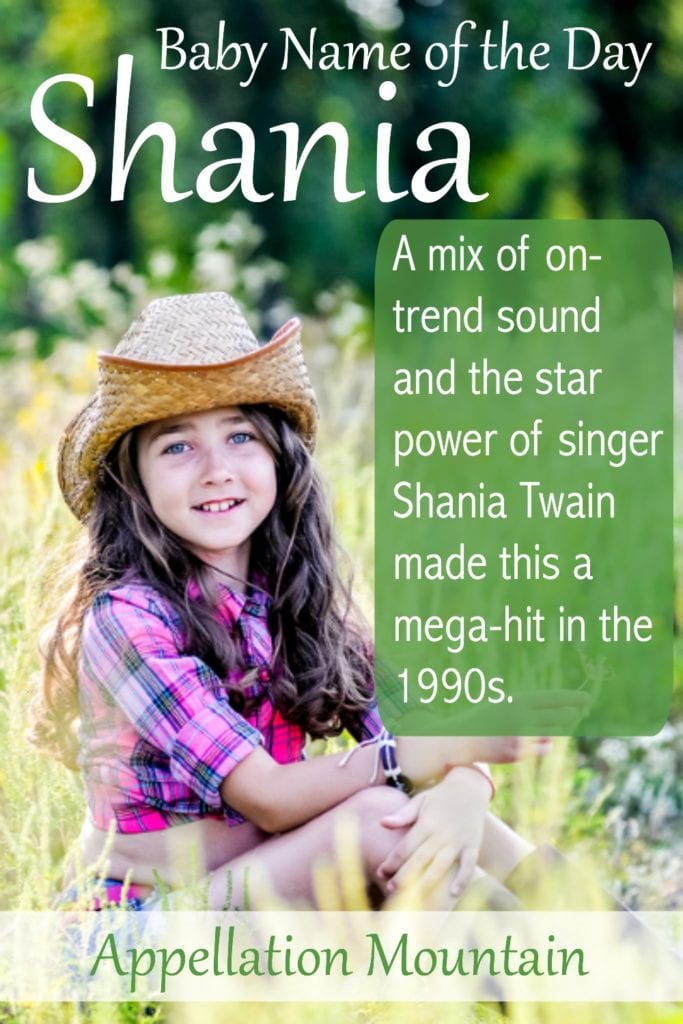 A singer put this misunderstood name on the map.

Thanks to Shania for suggesting her name as our Baby Name of the Day.

The name first appears in the US Social Security records way back in 1970. That’s ages before Shania Twain scored her first hit – or used the name at all.

What explains the name’s early use? We were wild for Shan- names in the era.

While ends in -ia names for girls weren’t wildly popular in the decade, they’ve always been around. Shania looks something like a mash-up of Shannon and Julia.

The more I looked, the more I found examples of the name in use even earlier. In 1996, diplomat Franklin Huddle escaped the hijacking and forced water landing of Ethiopian Airlines Flight 961. So did his wife, but the spelling of her name varied – the New York Times spelled it like Twain, but other accounts listed it as Chanya.

As I searched for Chanya, I also discovered women named Chaniya.

They reminded me of Shayna, a Hebrew name meaning beautiful. Shayna, spelled several ways, caught on in the late 1970s, another option lifted by our love for Sh- names.

The name remained in steady, sparing use through the 1980s. But then we arrive in 1995, and everything changes.

That’s because Shania Twain had arrived.  Her album, The Woman in Me, was released. She scored several country hits, then a few crossover hits.

“You’re Still the One” followed in 1998. The Grammy-winning song probably remains Twain’s best-known single, though it wasn’t her last hit.

Shania: On My Way

Everyone wanted to know about the singer’s distinctive name. Born Eileen, she adopted the stage name around 1993. Twain claims that it comes from the Ojibwa language and means “on my way.”

Twain’s stepfather belongs to the Ojibwa people. Their language is part of the Algonquin language family, and they live mostly in Canada, as well as border states in the US.

The idea proved irresistible, and the story of her name became much-repeated, almost certainly contributing to the spike in namesakes. However, attempts to fact check the origin and meaning hit a brick wall.

I found this clip from way back in 1993, of Twain claiming her name has no meaning. But the idea has stuck. A 1997 biography of the singer was titled Shania Twain: On My Way.

After 2011, the name left the US Top 1000. The singer’s career had cooled, and while Charlotte was rising quickly, many other Sh- names had passed their moment. In 2015, only 129 girls were given the name.

Any name bolstered by pop culture faces this challenge. Just as quickly as we fall for the name, it can fall out of favor.

The lack of a definite link to Native American culture probably hurts, too.

And yet overall, the sound that launched Sharon and Shannon to the top of the charts also lifted Shania – and it could certainly happen again.

Do you associate this name with the singer, or do you think it seems wearable even if you’re not a fan?