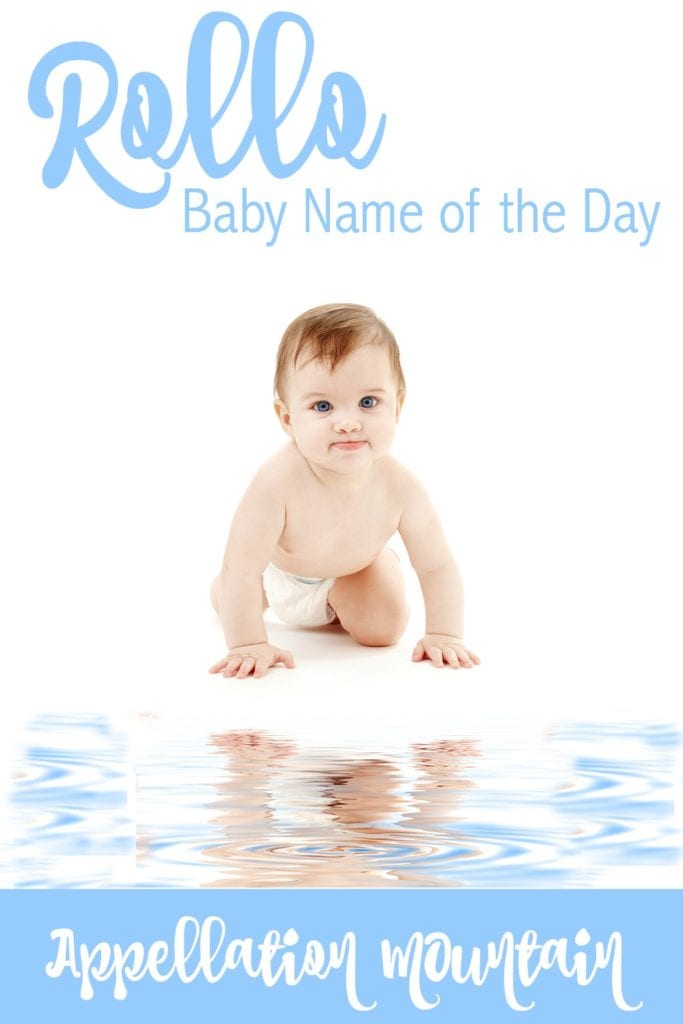 Rollo is an ends-in-o name for boys with history galore, but no one is using it. Really – no one!

Way back when, Hrodulf was a compound name formed from the Germanic elements meaning fame and wolf. A similar name was used in Old Norse.

Hrodulf became Rudolph and Rolf and eventually Roul in medieval French. And Roul was Latinized as Rollo.

At the turn of the tenth century, an enterprising Viking called Hrolf the Ganger set off to pillage and conquer. He eventually became the first Duke of Normandy, in modern-day France. How did he convince the Franks to accept his leadership? Easy. Hrolf promised to keep them safe from future invasions by other marauding Vikings.

His descendants became the Normans – the same ones who eventually conquered England. His descendants also ruled Sicily and Antioch at other points in the Middle Ages. Scotland’s Clan Rollo claims descent from one of Rollo’s descendants.

Despite his staggering success, he’s far from a household name.

I tend to think of Rollo as quirky, British, and posh – a brother for Tarquin or Cuthbert. Maybe that’s courtesy of a 1980s British animated character, a dim-witted but kindly king by the name. Or maybe that’s because a recent list of the poshest names in the UK included plenty of ends-in-o options, like Cosmo, Mungo, and Inigo.

And I found a few that fit that mold exactly, like an early twentieth century bishop of the Church of England, educated at Eton and Cambridge.

Maybe that’s not fair, though, because the name was popular enough in the US to make the Top 1000 in the nineteenth century, ranking as late as 1898. It wasn’t exclusive to the privileged. Rollo Beck became a distinguished ornithologist, but his origins were modest.

Rollo: By the Numbers

If Leo is huge and Arlo and Hugo on the rise, you might expect any o ending name for a boy to be climbing.

And yet the last year the name was given to five boys? 1987.

Rollo: The Next Big Thing?

Rainn Wilson and John Cleese have worn the name as quirky characters in successful movies. (Juno and Fierce Creatures, respectively.)

Rollo Weeks was a child actor, best known for 2000’s The Little Vampire. His sisters are Perdita and Honeysuckle, so the parents are clearly daring namers.

None of these uses was enough to turn Rollo’s fortunes around.

One factor that could turn things around? Popular series Vikings, shown on History in the US, is now in its fourth season. It’s about a family of Vikings, with names like Bjorn and Ragnar and yes, Rollo. It’s based loosely on the original from above. It’s one of the reasons I think Leif re-entered the US Top 1000 in 2014.

It also makes me think of the bucket-shaped caramel and chocolate candies, though that’s spelled with one L. (And I think the pronunciations are slightly different.) The candy takes its name from its original roll-like packaging.

If you’re after a true rarity with history to spare and a mix of interesting associations, this is one to consider. It’s quirky, cool, and on-trend. It might also work as a short form of related names, like Roland or even Randolph.

Would you consider Rollo for a son?