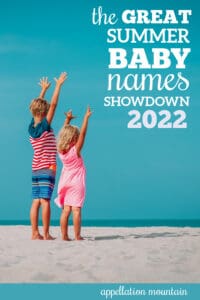 The votes are in!

We have two new names to join our list of favorites.

Let’s take a look at how we got here.

Every year, a certain number of names return to the US Top 1000, or debut for the very first time. Some of those names represent spelling tweaks of more popular choices, and some are names just teetering on the edge, in one year and out the next.

But among them? Some true gems.

I pick my favorites every year, and you vote your way through them to pick just a single winner.

This year’s contest started out with the following eight names:

The final match-up came down to Birdie versus Guinevere, and it wasn’t really close!

Guinevere racked up almost 61% of the vote. The name from Arthurian romance has never charted in the US Top 1000 prior to 2021.

It’s lush and dramatic, a big name with lots of sounds. But it also shortens to the very approachable Gwen, and it has that great middle V we love so much.

As for the boys’ contest? The victor there sounds just like a brother for Guinevere.

Appellation Mountain readers are particularly good at choosing the Next Big Thing in boys’ names. With the exception of 2021’s Leif, all of these names gained – in a big way – for boys from 2020 into 2021. The earliest winner, Wilder, has gone from crazy, out-there pick to fast-rising mainstream favorites.

This year’s contest started with the following names:

With a commanding 63% of the vote, Benedict won out over Cassian. Unlike Guinevere, Benedict has previously ranked in the US Top 1000, including for much of the early 1900s. It returned in 2018, but didn’t stick.

This time, though, Benedict might be ready to really rise. We’re wild about Ben. Benedict Cumberbatch has gone from celebrated British actor to international household name. (I mean … first he was Sherlock, but now he’s an Avenger. Oh, and he’s been nominated for some Oscars along the way.)

And there’s something about longer, gentlemanly names that appeals. Benedict sounds like a brother for Sebastian and Arthur, at home in an English country house … but not out of place on an American playground, either.

Time will tell if Appellation Mountain readers have predicted the future once more, but my guess?

We’ll be hearing more children named Guinevere and Benedict in the coming years.

Thanks to each and every one for voting! 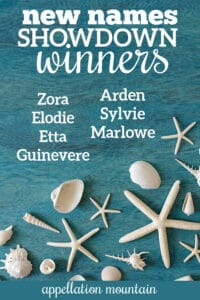 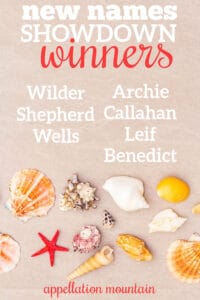