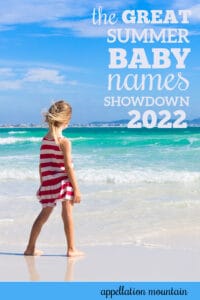 It’s the moment we’ve been waiting for: the FINAL match-up of the girls’ 2022 New Names Showdown!

Before we get to the big contest, here’s how July started:

Every year, the US Social Security Administration releases the 1000 most popular baby names for children born in the US during the prior twelve months. The release typically happens the Friday prior to Mother’s Day in May.

That list includes names that debut or return to the rankings. Sometimes they’re just new spellings of an already-popular name. Or maybe a name that has teetered right on the edge of popularity for years. But a handful always seem intriguing – either likely to catch fire themselves, emblematic of a broader trend, or both.

Every year, I choose eight of those newcomers or newly-returned choices, and set them up, bracket-style.

This year’s contest started out with the following eight names:

As of the SemiFinals, we were down to just four contenders. Here’s how those two contests went down!

With over 55% of the vote, gorgeous Guinevere reigns triumphant over lucky Clover. These two names couldn’t be more different, but I think they both have potential. According to the relatively close match, it seems like AM readers agree, too!

In an even closer contest, Birdie swept past Indigo with just under 54% of the total. While both are word names, Birdie feels vintage, retro, and feminine, while Indigo reads unisex, modern, and bold. Once again, just a few more votes could have changed the result, so I suspect both names may be catching on.

That means, of course, that our final contest is …