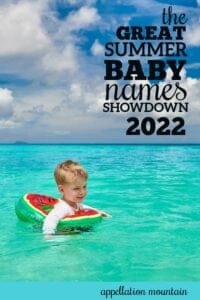 Every summer, we vote our way through some of the best new boy names. They’re names that have just debuted in, or returned to, the US Top 1000. Here’s this year’s list of names.

Mixed in with the re-spellings and the pop culture curiosities are some gems. They’re the names that just might be The Next Big Thing, or at least a Top 200 choice that we hear on playgrounds everywhere.

Your votes last week helped us narrow our list from eight contenders to just four.

With 84% of the vote, Benedict trounced Kylian. I’d thought that Kylian – the French spelling, boosted by a footballer –  might help offset parents’ unease at Irish Killian’s first syllable. Not so. Or, at least, not enough to hold off a traditional, vaguely British, very Cumberbatch rival.

Likewise, Cassian ran away with this round, earning over 85% of the total against Amiri. While Amiri – and names like it – are rising in use, they were no match for storied Cassian. The upcoming release of Disney’s series about the Star Wars universe hero Cassian Andor probably helped.

Evander raked in nearly 79% of the tally, leaving Granger in the dust. While surname names like Granger are very popular, it’s tough to compete against Evander. It looks like an Evan-Alexander mash-up, but it’s a Greek name with an irresistible meaning: good man.

In the closest contest – by far! – Bowie edged out Turner by just a few votes, collecting less than 51% of the votes. Does this signal that both names are poised to gain in use? Bowie could have Lennon/Hendrix/Marley potential. As for Turner, it fits in so nearly with Hunter, Carter, and company, that it, too, could catch on in a big way.

That means we say farewell to Kylian, Amiri, Granger, and Turner.

Time to vote in the SemiFinals!

Polls remain open through July 13th. Check back on Saturday, July 16th to see if your favorites advanced to the next round, and, of course, to vote in the final match-up!