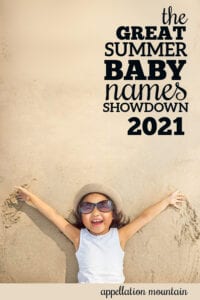 The New Names Showdown 2021 is underway!

Every year, when the new data is released, a handful of names have returned to the US Top 1000, or debuted for the very first time. I choose eight of my favorites for boys, and eight for girls. By favorites, I mean the most interesting names – some might be future Top 100 hits. Others just catch my eye.

We vote our way through those names until we choose our winners – one name for boys, one for girls.

As it happens, we’re pretty good at choosing names that will be future hits, especially when it comes to the boys!

Thanks to everyone who voted in the opening round!

Let’s look at the results before we go any further.

Zoya decimated Mazikeen, taking nearly 92% of the vote. Maybe I should’ve seen that one coming. Invented name of a demon on Netflix’s Lucifer versus a Slavic spin on Zoe with an irresistibly pan-global vibe? Yeah. Not a shocking outcome at all. Zoya advances.

In a much closer match, Marceline barely squeaked past Jovie with 51.5% of the total. Joyful, exuberant Jovie is a seasonal favorite, one that I’ve been waiting to make the Top 1000 for ages. But while Jovie’s day has finally come, it’s Marceline that continues in the contest. Feminine and French, Marceline is cousin to former masculine favorite Mark. But it’s also a Missouri city with deep ties to the story of Walt Disney and everything he created.

Speaking of Disney, their latest heroine, Raya, fell to sparky retro name Etta. Etta scooped up nearly 72% of the total, against Raya’s just over 28%. Still, this feels like one of those contests where both names might ultimately come out winners. We love a vintage mini name – just ask Stella and Sadie. But, like Zoya, Raya’s pan-global style could ultimately prove appealing, too. But for now, it’s Etta that moves on to the next round.

But the most razor-thin victory goes to Artemis, which won not-quite 51% of the total against Loretta. In the contest that most vexed readers this round, the lead flip-flopped between Artemis and Loretta in the beginning. Ultimately, 1930s favorite Loretta just missed out to goddess name Artemis. But it’s safe to say that both of them have plenty of promise.

That brings us to the next round … and it just doesn’t get any easier, does it?

The contests will remain open through Thursday, July 22nd. Please come back next Saturday to see which names win! And, of course, to vote in the next round.