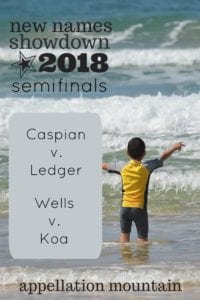 But first, the results of the opening round.

That means Caspian, Wells, Koa, and Ledger all advance in the New Names Showdown 2018 boys semifinals.

A little bit preppy, and a little bit nature name, Wells takes on Hawaiian import Koa, a tree name that sounds so very close to the chart-topping Noah.

Remember, our goal isn’t necessarily to choose the name we love most – though that’s not a bad way to vote! Instead, we’re looking for the name new (or newly returned) to the Top 1000 that’s most likely to climb in the coming years. If we were voting in the 1970s, would anyone of us have called Liam as a future #1 name? Maybe … but in 1974, Liam would have been up against names like Brandt, Tate, Cullen, Bronson, and Claudio. I’m not sure I would have picked Liam over, say, Tate.

But the collective wisdom of this group does seem to get it right. Our past two winners, Shepherd and Wilder, are continuing to catch on, transitioning from fresh, new names to mainstream favorites.

So which of these four boy names will join them? That’s up to you!

Voting remains open until Thursday, July 19th. Check back on Saturday, July 21st for the final round. And don’t miss the girls’ contest, either!