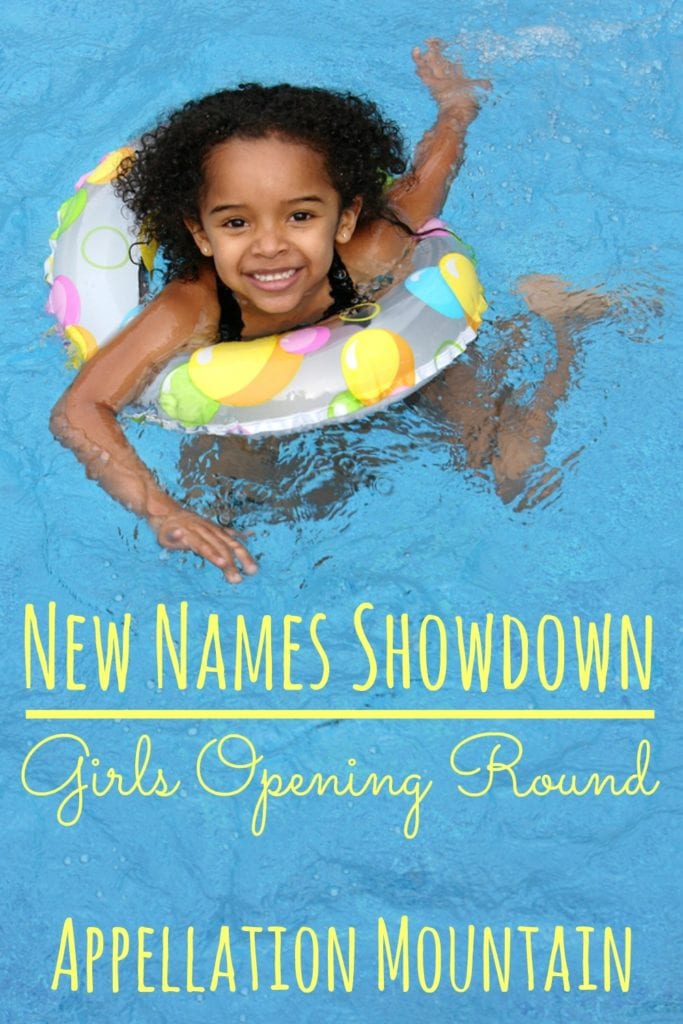 Our goal: to choose the name most likely to climb dramatically when the new numbers come out in 2017. This is the girls’ contest; the boys’ opening round will post tomorrow.

I went through the list of all the names new to the US Top 1000 this year, and picked eight. Eight names that weren’t clearly spelling variations of existing names. (Sorry, Adaline and Adilynn!) Obvious pop culture phenoms also were passed by – even though newcomer Dalary could follow sister name Daleyza right up the charts.

It’s very possible that I omitted a future Top 100 name.

And yet, I couldn’t think of any practical way to put 47 names in the mix for!

Vintage, jazz age Zelda and short, sassy Frankie could be sister names – which makes this match up especially difficult!

At first glance, I thought Alaia might another in the endless twists on Aaliyah. But it’s a separate name, meaning joyful in Basque. Lyra, of course, is a musical, celestial name with ties to Philip Pullman’s His Dark Materials. Both names remind me of smash hit Aria – which is to say, they could be huge.

Briar is a Disney princess, the name used by Sleeping Beauty while she was in hiding. Ophelia is Shakespeare’s doomed maiden, Hamlet’s might-have-been bride. A glance at the current Top 100 demonstrates that both sources can produce hits – Disney’s Jasmine and the Bard’s Olivia are proof plenty.

There have always been tailored names for girls, like Margaret and Eleanor. Parents love this style – just look at Harper and Madison and Riley. So it’s always worth keeping an eye on tailored names on the rise. Kensington, of course, has a royal pedigree – it’s a London palace, and the current home of Will and Kate. Arden, too, has a story to tell. It’s a forest in England – and the second name with a tie to Shakespeare. Could either of these be the next Brooklyn/Piper/Skylar?

Thanks for voting! Check back next Friday to see which of your favorite names won the New Names Showdown 2016 Opening Round!