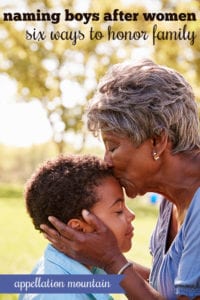 Naming boys after women should be standard practice.

After all, we’ve been naming our sons after their dads and grandfathers for generations. We name girls after the significant men in their lives, too. What else explains so many feminine forms of traditional masculine names? And, to a lesser extent, we meet women named after their grandmothers and beloved aunts and such, too.

But meeting boys named after the significant women in their lives seems far less common.

And women’s maiden names have often been passed down to boys as middle names, too. So perhaps there’s plenty of interest in naming our boys after the women we love. We just need to consider – and embrace! – our options.

Here are six approaches to naming boys after women that work.

An oldie, but a goodie! Passing down family surnames from the mother’s side is a time-honored tradition. I’d venture that it’s the only common way we’ve been naming boys after women, at least in the US, for the last few hundred years. In the American South, as well as New England, it seems especially common.

But that doesn’t deprive it of its power. It even works when the parents both keep their original surnames: she’s Ashley Walker, he’s Matthew Briggs, and their son is Walker Briggs.

Naming Boys After Women: Just Use Her Name

The rise of unisex names suggests that we might be able to hand down more names with ease. Names like Rowan, Remy, Taylor, and Parker might be handed down to future grandsons and granddaughters alike.

Naming Boys After Women: Use the Masculine Form

All of those masculine-feminine equivalent names work both ways. And there’s no need to stick with a strict interpretation. Sure, Joanna’s grandson could be John, since the two names are most closely related. But Jonah and Josiah work beautifully, too.

Donovan for Donna, Jude for Judith, Beau for Bonnie, and Ross for Rose all come to mind, too. A little bit of creativity can nearly always uncover a name that’s close enough to serve.

Families sometimes lament that their surname is too cumbersome to serve as a given name. But here’s a possibility: translate it. Zimmerman means carpenter; Perez comes, ultimately, from Peter; and Kumar can mean prince – just like Brendan.

If the direct translation of her surname doesn’t yield any possibilities, how about names with shared meanings? Bertha and Clara mean bright; so does Robert.

Or even vague meanings. Irish surname Kelly brings to mind a bright green color. Other green color names, like Hunter or Forrest, might work.

Naming Boys After Women: Use a Part of the Name

When Kourtney Kardashian welcomed son Mason, she gave him the middle name Dash – part of her maiden name.

Nicole’s grandson might be Cole. Grandma Wyman might be honored by a Wyatt. Kaminski is Camden, Cameron, or even just Cam. Contracting a name works, too; Zajac becomes Zac – or Zachary, called Zac.

Naming Boys After Women: Use a Name from Her Family History

Of course, you might look farther back in your family history. What what her mother’s maiden name? Her hometown? The name of the street where she lived as a child?

Some families feel like a more obscure reference isn’t enough of an honor. But that’s really up to you. If it feels like you’re choosing the name because it brings to mind a significant woman in your life? Then it works.

Have you considered naming boys after women in your life? Share your stories!

Note: A number of readers have commented that they know men named for women, or named their sons for women. It’s a good reminder that this does happen, but sometimes it’s subtle. So while it’s easy to spot three generations of Bill, Billy, and Will, boys named for women might be more common – and just tougher to recognize.