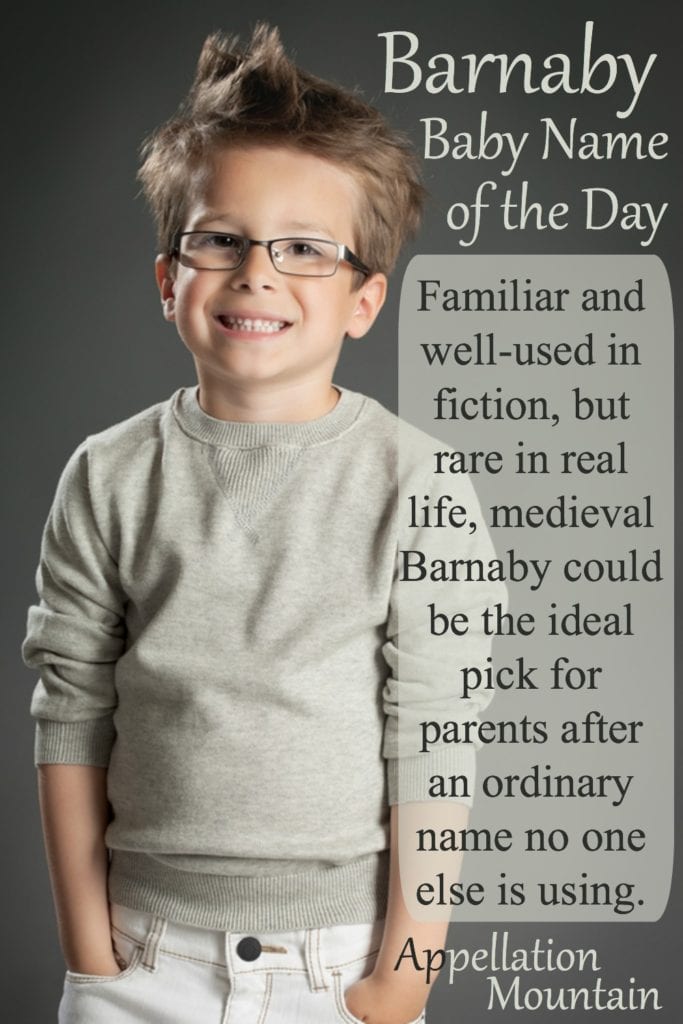 Barnaby comes from the ancient world by way of medieval England – a familiar path. Yet this name remains quite rare.

Thanks to Lola for suggesting our Baby Name of the Day: Barnaby.

Back in the first century, Saint Barnabas journeyed with Saint Paul, winning converts and taking part in the Council of Jerusalem. Some accounts make him the cousin of Mark the Evangelist.

Barnabas was born Joseph. He took the Aramaic name at the same time he set out to spread the gospel. Bar means “son of.” The second element might mean prophet, or it might mean encourage or exhort.

Barnaby evolved in medieval England, just like Margery for Margaret and Cecily for Cecilia.

Neither the -bas or -by versions has ever cracked the US Top 1000. And yet they’re broadly familiar to most, thanks to the Biblical figure, and a long line of pop culture figures by the name, including:

Barnaby: By the Numbers

Places to hear the name are plentiful, but actual bearers of the name? Those are harder to find.

Nickname Barney fared better, ranking in the US Top 1000 from 1880 into the 1970s. Pop culture argues against the name’s use in the US – think Rubble, the Purple Dinosaur, and How I Met Your Mother – but it remains more common in the UK. A mere six boys were named Barney in the US last year.

Believe it or not, that’s still more popular than Barnaby. It was given to fewer than five boys in 2015. Barnabas comes in first, with a whopping 15 newborns last year.

Still, plenty of names conforming to this style have been powerfully popular in the US. Think of Jeremy (from Jeremiah) and Zachary (from Zacharias). Barnabas fits in with ancients like Julius and Atticus.

You might also shorten the name to Bas or Baz, further modernizing the ancient appellation.

Considering the dozens of appealing uses of the name, it comes as a surprise that Barnaby has never been more popular.

Jackson Douglas – known for playing Jackson on The Gilmore Girls – and comedian wife Alex Borstein are parents to Barnaby and Henrietta. (Trivia note: Alex was cast as the original Sookie, but joined the case of MADtv instead.) The siblings’ names feel just right together – edgy and cool, but rooted in tradition, with plenty of possible nicknames.

And that’s the thing about Barnaby. It manages to be a surprising name while remaining completely ordinary. With boys answering to big, bold names like Anakin and Messiah, a quietly unusual choice can stand out, too.

If you’re seeking something truly different, without being invented or outlandish in any way, this name succeeds.

Would you consider Barnaby for a son?