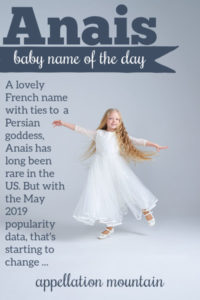 Anais makes a sophisticated French spin on an evergreen choice for girls.

Strictly speaking, this name should be spelled Anaïs. The diaresis matters. Otherwise, how would you know to pronounce the name ahn na EES?

Except umlauts, cedillas, and the like are not typically used in American English. Practically speaking, they’re often omitted from databases. And, of course, not every English speaker will understand why Anaïs is different from Anais.

The sliver lining? Americans are used to pronouncing names (and words) all sorts of ways, and there’s nothing inherently difficult about saying ahn na EES – even if it’s not phonetically transparent.

Inevitably, the name might sound a little different depending on where you live. But if you don’t mind a certain amount of variation, and you’re patient enough to correct and explain a few (dozen) times, most people will probably get this name just fine.

Anais claims deep roots. It’s an elaboration of the classic and enduring Ann. It shares Ann’s meaning, too – grace.

The name feels French today, though I’ve heard that it evolved in the Provençal and Catalan dialects, spoken in the Pyrenees, the mountainous region in the south of France, bordering Spain. (Fun fact: in Catalan, hello sounds like the Spanish hola while good-bye is closer to the French adieu.)

French diminutives for Anne also include Annette, Annick, Anouk, Ninon, and, of course, Annette. The Catalan and Provençal roots help explain why nothing else sounds quite like Anais.

The first famous figure to bear the name was writer Anais Nin. Born in France to Cuban parents, she grew up in Spain and Cuba, moved to Paris, and then eventually to the United States.

Her writing is not for children – it’s a mix of journals and erotica, fiction and non. But her bold and creative spirit might inspire modern parents, especially as she recedes farther into the past. (Nin died in 1977, though much of her writing has been published posthumously.)

She lends the names some literary cachet, though it’s very different from, say, Beatrix (Potter) or Louisa (May Alcott).

Back in the 1980s, this name spiked in use in France. That almost tracks with Nin’s literary success, but not quite.

Instead, it’s thanks to a fragrance.

Jean Bousquet established fashion house Cacharel in the 1960s. A decade later, the brand collaborated on its first fragrance: Anaïs Anaïs. The scent debuted in 1978 and became an international sensation. In just a few years, it became a Top Ten favorite girl name in France, too.

So where did Cacharel find inspiration? Maybe it was the writer, but they tell a very different story.

The Persian goddess of love and fertility and water was called Anaïtis. She’s also called Anahita.

People worshiped the goddess hundreds of years before the birth of Christ. Sometimes she’s listed as the equivalent of Aphrodite or Venus.

It’s said this goddess inspired the name of the fragrance, but it seems equally likely that the designers chose the name, then worked backwards to find the right story.

Thanks to roots in French, Spanish, and Persian, Anais surfaces all across the world. There’s a former Swedish pop singer and a 2007 Miss Iraq. British singer-songwriter Noel Gallagher gave the name to his daughter in 2000. So that carries the name all around the world.

Fiction gives us a few notables, too. There’s a minor character in the X-Men comics by the name. Cartoon Network’s The Amazing World of Gumball premiered in 2011, complete with Gumball’s lil sis, Anais. (She’s a pink rabbit-like creature; her brother is more of a blue cat.)

All of this – the perfume, the animated character, the author – have pushed the name into the Top 1000 a handful of times since the late 1980s. As of the May 2019 data release, Anais is back in the US Top 1000 once more. But there’s no telling if the name will stay.

Overall, there’s something beguiling about this choice. It’s sophisticated, even glamorous, but not in a way that feels burdensome. With our love for liquid, vowel-heavy names, it’s easy to imagine Anais fitting right in with Sienna and Eliana and Aurora.

It might make a great stands-out/fits-in choice … though maybe it’s more stands out than not.

Would you consider this name for a daughter? Does pronunciation give you pause?