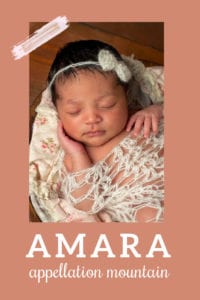 Beguiling, international baby name Amara claims roots from Africa to Romania and beyond.

Thanks to Laney McDonald for suggesting our Baby Name of the Day.

At least eight possible origins exist for the baby name Amara. Ready? Let’s run through them:

But here’s the thing: none of these meanings or origins explain the name’s rise.

There’s a member of the X-Men, Magma – real name Amara Juliana Olivians, a native of the fictional Nova Roma. The character debuted in 1985, and there’s a corresponding jump in the name’s use.

Then came Sailor Moon. The Japanese manga debuted in the 1990s and arrived in the US not long after. But it didn’t catch on until the animated series starting running on Cartoon Network in 1998. Sailor Uranus is Haruka in Japanese; Amara in English.

The superheroes combined to tip the name into the US Top 1000.

Bulgari released a fragrance called Aqua Amara, introduced in 2014. A handful of international celebrities and movies followed, too.

The biggest boost may have come from The Vampire Diaries. Season five debuted in 2013, introducing us to the very first immortal woman – Amara. Series lead Nina Dobrev played the part, as one of many incarnations of her main character,  Elena. While the character appeared in only a handful of episodes, it seems to have had an impact.

And then there’s Amara La Negra. The aspiring singer joined the cast of Love & Hip Hop: Miami in 2018. Her career has risen dramatically since, fueling the popularity of the name.

With truly international roots and multiple, positive meanings, the baby name Amara is likely to appeal to many parents. While pop culture pushed it into the mainstream, it doesn’t feel overly tied to any one fictional universe.

If you’re after a name that’s modern with roots, and feels at home across many cultures and languages, Amara is one to consider.

What do you think of the baby name Amara? Will it continue to catch on? 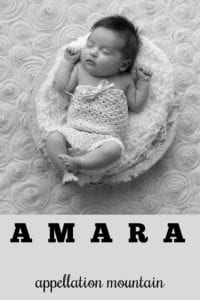