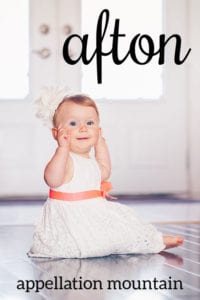 Borrowing river names for our children might seem novel, but it isn’t so. We’ve been calling our kids Jordan ever since the Crusaders made their way home from the Holy Land.

The original River Afton sits in Ayrshire, Scotland. The name’s origins are elusive. But it appeared in the US Top 1000 as early as 1907, and spent about fifteen years hugging the edges of the popularity charts.

But how does a small-ish Scottish river make the name charts, when the Nile and mighty Mississippi fail to do so? Blame a poet.

He penned Sweet Afton was written in 1791.

It’s worth noting that the only given name in the poem is Mary:

My Mary’s asleep by thy murmuring stream,
Flow gently, sweet Afton, disturb not her dream.

But that’s not what stayed with us. Instead, plenty of places borrowed the literary river name, including over two dozen cities and towns in the US.

Burns’ poem is often set to music, and frequently sung to the tune of Away in a Manger.

Afton Down, located on the Isle of Wight, was the site of the second Isle of Wight music festival, in 1970. The line-up included The Who, The Doors, and Jimi Hendrix. There were more attendees than at Woodstock.

Acoustic trio Nickel Creek covered the song in 2000. Lori at The Real Cruze family mentions that the Nickel Creek rendition inspired them to chose the name for their youngest. She’s not alone; the song comes up fairly often in discussions of the name.

But it wasn’t music that helped this Scottish river name catch on in the US. Nope, credit goes to Dallas, as in the prime time soap sensation about a family rich on Texas oil.

And while it didn’t really catch on as a girl’s given name at the time, the character returned with the 2012 reboot of the series – coinciding with another uptick in the use of the name.

All of this makes for a name that’s heard occasionally, but far from common.

If you’re after something literary and rare, a tailored name with a built-in lullaby, this name might be a promising option.

What do you think of Afton? Is it better for a boy or a girl? Are there any other river names you would consider?

Special thanks to reader Afton for suggesting that her post needed an update! 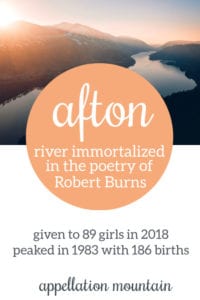