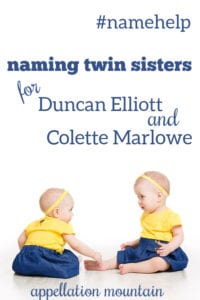 UPDATE: They’re here! Kellie writes: Abby! Thanks to you and your readers for all the suggestions. Our girls arrived early, and spent some time in the NICU. Luckily, we were home before things started getting really crazy, and everybody is doing great.

Okay, the names: we really liked Margot, but thought it might too close to Marlowe. But then we decided it really didn’t matter, so baby A became Margot Blair. We narrowed it down to Daphne Laine or Phoebe Laine for her sister, and everyone agreed that Daphne Laine was perfect.

Our twin daughters will be here soon – due in early March, but I’ll be lucky to make it to Valentine’s Day! Because we’ve had so many scares with this pregnancy, we’ve been a little shy about choosing names. But it’s time now, and we need some help with our long, long, LONG list!

We have a son named Duncan Elliott M@d!s0n and a daughter named Colette Marlowe M@d!s0n. I don’t like frilly, but I’m not into names like Harper, either, at least not as first names.

We mostly agree on all of these, but choosing two that sound right has us stuck.

Congratulations on your new daughters!

Here’s my take on twin names: we say them together all. the. time. At least in early childhood. Yes, we say siblings’ names together, too – sometimes a lot. But twins, well … it’s different, I think. Because your girls will share so much, it’s important that their names feel balanced. And because they’ll often be said together, it’s good to think about how they sound as a set.

It seems like you have lots of options on your current list, so instead of adding new possibilities, I’m going to mix and match a few great combinations.

Because Duncan and Colette are two-syllable, nickname-proof names, I wonder if you’d like the same for these daughters? I love Daphne and Gemma together, two  names that are slightly outside of the mainstream, but still familiar. And the middles – Carter and Laine – echo the surname-style middle Marlowe.

Just like above, Esme and Zora are both two-syllable, nickname-proof names. Anouk is something of a wild card as a middle, while Eden feels a little more expected.

Rory and Gwen are both brisk, upbeat names with a lot of spirit. (I put them both on this list.) And Simone and Eloise both feel gently French.

I’d call Margot and Vera relatively traditional, while Ember and Lux are much more unconventional. It makes for a great name formula. Plus, I love the subtle link between fiery Ember and all the light of Lux.

Blair and Sloane feel nicely paired, relatively uncommon choices, and both surnames. Daphne and Persephone both come from Greek myth, and have a fanciful, feminine appeal. The combinations are surprisingly, but well balanced.

I love the idea of Lucia and Annika as sisters. They strike me as traditional picks with a twist – Lucia instead of the more popular Lucy or Lucille; Annika as an unexpected Ann- name. The middles are two from your list that feel nicely international – just like the firsts. Though it’s kind of a crazy quilt of pan-European name origins – but I think that’s why they work so well together.

I’m having a hard time narrowing it down to just one favorite set! I’ll go with Daphne Carter and Gemma Laine, if only because they seem like such a perfect parallel to Colette Marlowe.

But let’s open it up to the community, because I feel like there are so many great combinations possible.

Readers, what would you name twin sisters for Duncan Elliott and Colette Marlowe? 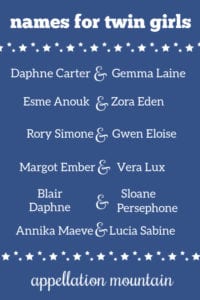