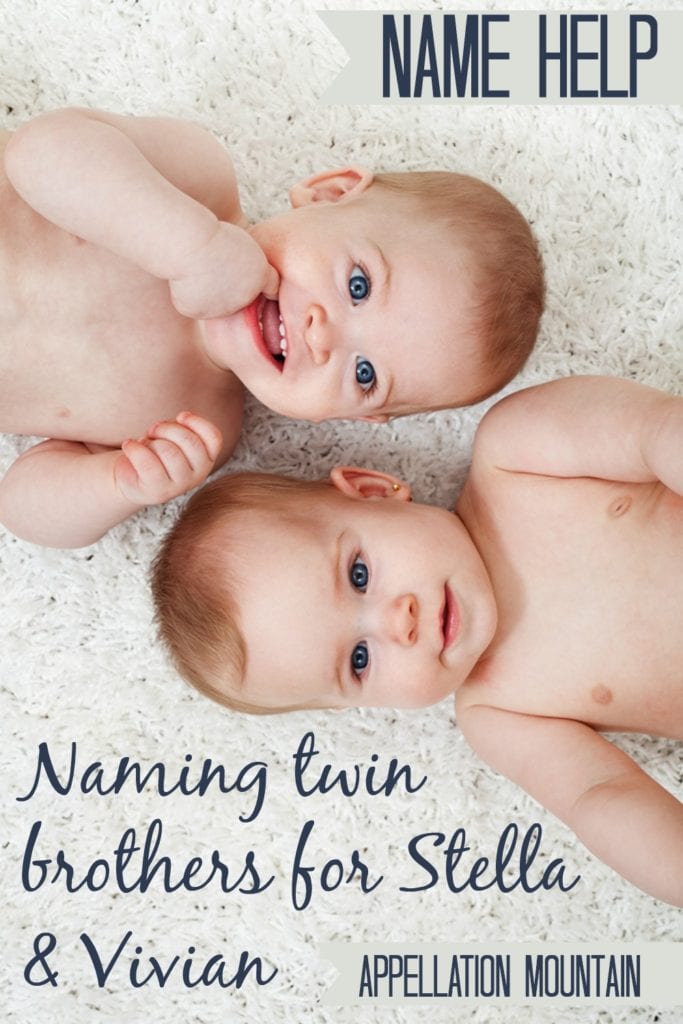 Name Help is a series at Appellation Mountain. Every Saturday one reader’s name questions will be discussed.

We have two daughters, Stella Mackenzie and Vivian Joelle. I love their names, don’t really mind when we meet other girls with the same names, and didn’t really spend a lot of time coming up with them.

We wanted just one more to complete our family, and guess what? We’re having twin boys!

If we had a third girl, I liked Hadley or Sophie, but I don’t really have a boys’ list.

My husband keeps suggesting names like Matthew, Joseph, Nicholas, and Christopher. They’re okay, but we know lots of men with those names. And we don’t really love them. They’re just … names. Our dads are William and Larry. We like the idea of a baby William, but Larry? Sorry, no!

The boys are due in January, but will probably arrive sooner. Our last name is one-syllable, starts with a Q, and is used as a first name, too. So that means no super-short names, please.

Some people find it harder to name girls, but I’ve often found that boys bring up more conflict. Maybe that’s because we sometimes feel pressure to stick to more traditional names for our sons. (Though that’s changing!)

For girls, you’ve chosen names that are current but not modern. Vivian and Stella feel vintage, but mainstream vintage, as opposed to still slightly dusty names like Bernadette and Dorothy.

For boys, your husband prefers names that might be called timeless. The feminine equivalents might be Katherine and Elizabeth.

It’s possible that he prefers more traditional names for boys. But let’s look for the logical brother names for Stella and Vivian, and see if these will work.

Miles – Miles combines a current sound with a long history of use. It makes a perfect brother name for Vivian and Stella.

Theo – Theodore is another option, but it seems like lean towards nickname-proof names. Theo stands on its own very nicely.

Julian – Julian shares the same rhythm as Vivian, but I think they’re different enough to be sibling names.

Emmett – I love the sound of boy names like Everett, Beckett, and Emmett with your surname.

Felix – Felix is definitely vintage, and boasts plenty of history. But like Stella and Vivian, the name feels quite current now.

Oliver – Oliver keeps climbing the popularity charts, but if you aren’t phased by the possibility of your son sharing his name, I think it’s a great brother name for Stella and Vivian.

Henry – Henry seems almost as classic as Christopher and Matthew, but it also crosses into vintage territory, like Vivian and Stella.

Jonah – Jonah shares the possible nickname Joe with the more traditional Joseph – and yet it’s different, too.

As for middle names, I wonder if this would work: William and Lawrence. I agree that Larry feels a little dated, but it originated as a nickname for Lawrence. Lawrence strikes me as a timeless, enduring choice.

My favorites are Jonah Lawrence and Theo William, but I know others will have great suggestions, too!

Readers, over to you! What would you name twin brothers for Stella and Vivian?