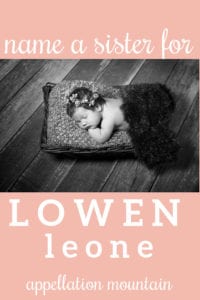 We’re expecting our second daughter at the end of August and don’t feel certain about her name.

Big sister is Lowen Leone. We loved the meaning – it’s Cornish for joyful and German for lion. She is a kind and fierce girl. The middle name Leone is after her maternal great-grandmother.

Our top choice for this baby girl is Margot Quinn, but we have some concerns that Margot may be too popular. Using Quinn as part of the name is important.

We would like the name to have a meaning of sunshine/light and/or eagle/hawk to tie to family connections. We love surnames and gender neutral names.

Her last name will sound like Shell, but with a long ‘e’ sound.

Margot Quinn is a great name!

But compared to Lowen Leone?

Margot Quinn feels far more traditional, and mainstream. While it’s not frilly, it is gendered. We all recognize Margot as feminine. Quinn, too, is used predominantly for girls.

So I’ll suggest that we put Margot Quinn aside for a minute. Not because it’s not a great name, but because I wonder whether it’s the best name for your family.

Let’s look at some possibilities that feel rare and unexpected, and also have the meanings you seek.

Speaking of meanings, how amazing is it that Lowen and Leone both relate to lions? It’s a double dip – a significant family middle, and a powerful meaning, too.

Dozens and dozens of names mean light, or suggest light. It’s a big category! I’m going to focus on ones that seem like a style match for Lowen.

Clytie – It means noble. But in Greek myth, Clytie loved the sun so much that she was turned into a heliotrope – a flower that tracks the sun across the sky.

Lux – Another name derived from the Latin for light.

Zahara – From a Hebrew name meaning shining or brilliant.

NAMES RELATED TO HAWKS AND EAGLES

Aquila – It means eagle, from a Latin name. Is the qui enough of a nod to Quinn?

Circe – A sorceress who waylaid Odysseys on his journeys in Homer’s ancient tale, the name comes from kirkos – hawk.

Keaton, Keats – Possibly a stretch, or maybe a surname related to the kite – a bird of prey. Let’s call it hawk-adjacent.

Vega – Let’s end with a double-dip not unlike Lowen. Vega is a very bright star in the constellation Lyra. The Arabic name means – roughly – the falling or swooping eagle.

Is keeping Quinn in your daughter’s name non-negotiable? It seems hard to accommodate both meanings without adding an additional name.

But Vega would touch on both of your meanings – the brightness of the star, the image with which it is associated. Lowen Leone and Vega Quinn.

My favorite, I think, is Clytie Quinn. It only picks up on half of the imagery and meaning. But it repeats the alliteration (sort of) in Lowen Leone. And I think that makes the names sound just like sisters.

Readers, over to you – what would you name a sister for Lowen Leone, with a strong preference for the meanings light and eagle, and probably the middle name Quinn?