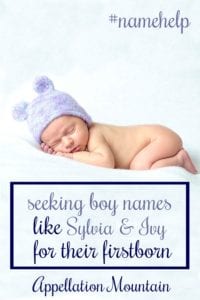 Update: It was a girl after all. Welcome Ivy Eleanor! See their comment below for what they’d have named a boy. Thanks to all for their help.

My husband and I would really appreciate your help! We are expecting our first baby late in February and although we think we have got a girl’s name sorted (Ivy Eleanor Abel or Sylvia Elsie Abel) we can’t quite fall in love with any of our boys names. Our last name is the same as the famous film-making brothers.

We like names with a bit of history or meaning and are using mostly family names for a girl. However, lots of the male family names don’t really work for us (Peter, Frederick, Malcolm, Norman, Raymond) so we are more than willing to cast the net a little wider.

My husband likes Norman or Raymond for a middle but I would prefer Ross (a family name but too close to be used as a first). We definitely want Matthew as a middle, but for the same reason we want it for a middle we couldn’t have it for a first.

We quite like Albert, which is the top of our current list (Albert Matthew Ross?), but keep dithering about it. I also really like Alfred, especially as it has the ‘Fred’ from Frederick without the ‘rick’ which I hate, but a cousin already has that name and I don’t want to duplicate! I always thought I liked longer names with the option to shorten, but now I am actually naming a baby most of my favourites seem to be a little shorter than before! We are open to long or short names. As the baby is a winter baby, I like the idea of a wintery name but again, it is not a deal breaker.

Other names one of us likes but the other doesn’t include:

Jacob (too ordinary)
Eric (I love, husband doesn’t)
Rory (too many Rs with our last name),
Timothy (sounds lispy)
Nicholas

We would really love to hear what you and the readers think!

I think these are the most difficult questions! You basically agree, right? The names on your list are traditional favorites, not too common but not too out-there, either.

And yet getting to one single name – or even two or three for a shortlist – can still be difficult.

For starters, let’s not talk about middles. We use our child’s first name 99% of the time, so it deserves the lion’s share of our attention.

It seems like there are plenty of traditional names in the same category as the others you like. But it also seems like Albert might very much be The Name. Let’s look at some others with the same vibe. And if you get to the end of this list, and none of them measure up to Albert?

That’s a pretty strong signal that Albert could be the name you’re looking for.

Arthur – As royal as Albert, Arthur is another traditional name that feels increasingly stylish today. Your surname ends with -r, so this might sound choppy … but in your case, I think it makes for a handsome combination.

Clark – Once upon a time, Clark felt dated. And yet, it belongs to a Hollywood icon (Clark Gable) and a favorite superhero’s alter ego (Clark Kent). It has the same short, upbeat sound as Jack. It’s short – and that’s not what you had in mind – but I wonder if that might appeal?

Franklin – Strictly speaking, Franklin is a surname name. But it feels like a first, doesn’t it? From President Roosevelt to the cartoon turtle star of a series of books and a long-running children’s television series, Franklin has been used as a first for years. I think it has the same vibe as Alfred and Timothy.

Gilbert – Okay, maybe Gilbert is a little out-there. It’s an awful lot like Albert, and even the go-to nicknames are similar. They share Bertie/Bert, and Gil is similar to Al. But I think Gilbert sounds more gently vintage, the kind of brother name I’d imagine for Sylvia or Ivy. It is far less common than most of the names on your list, though, and you’d probably be asked – forever and ever again – if you were an Anne of Green Gables fan. (Wait, are you? Because if you are, maybe it’s perfect …)

Henry – Maybe you already know a bunch of little Henrys, or maybe this name doesn’t work for another reason. But it’s an impeccable classic that feels at home on your list.

Lawrence – I keep waiting for Lawrence to make a comeback. After all, it’s a towering classic with a long history of use. Maybe the hold-up is how recently Lawrence was popular – it peaked in the US In the 1940s. Or maybe everyone hesitates about the nickname Larry. But Lawrence requires no nickname, and would wear nicely in full.

Louis – Whether you pronounce it the French way, lou EE, or add the ‘s’, Louis sounds like a brother for Sylvia or Ivy, which makes me think it deserves consideration.

Robert – Many of your shortlisted names feel traditional, but not necessarily stylish. They’re rock solid, unlikely to climb dramatically in use, but also unlikely to plummet in the rankings. If there’s any name that hits that mark for me, it’s Robert. Once a #1 favorite in the US, Robert feels outside of the trends today, an enduring choices. Nicknames come and go – Rob was long favored, but lately I’ve heard of more baby Bobbys. Either way, it was the first name I thought of, and still the one that I’d put at the top of my list.

Vincent – I’m adding this one at the very last minute. Because your top two girl names, Sylvia and Ivy, both include the ‘v’ sound. So could a V boys’ name work well for a son? I think it’s worth a thought, especially because Vincent hits that traditional-not-trendy mark so nicely.

One last thought, since you noted that you like Fred but not Rick, and can’t use Alfred. Would you consider Wilfred? It’s an old school name with a vintage, throwback vibe – but that’s not a bad thing. Actor David Tennant (my favorite Doctor, if you’re a fan) named his son Wilfred, so maybe that softens my view of the name. But I do think it’s worth consideration. After all, Wil/Will or Wilf/Wilfie is every bit as great a go-to short form as Al or Alfie.

So I’d suggest Robert, but that’s only if Albert doesn’t feel like a true #1 choice after this exercise. Because I truly do think that Albert Matthew Ross is pretty much perfect.

I do like Henry Raymond Frost an awful lot, but I’m not sure if it works better than Albert Matthew Ross.

Let’s turn this over to the readers: what would you suggest to Sophie and Zak for their firstborn if it’s a boy?