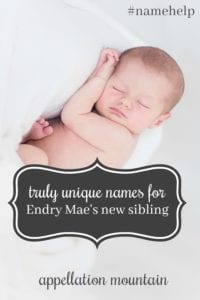 My husband and I are expecting our first “ours” baby later this year.

I say “ours” because when I married my husband, I became the mother of a beautiful little girl named Endry Mae. Every time someone hears her name, they comment on how unique it is, and I have tried to research the name Endry a dozen times, but have come up with basically nothing as to its origin/meaning/statistics.

My husband tells me that her mom found the name in some baby name book and that it’s Gaelic/Irish in origin. That’s all he knows. I have always liked unique names, but seeing as when I search the name “Endry” on Google, and come up with essentially nothing, her name takes the cake.

My problem is, I want to name our baby something just as unique/unusual, but am having a hard time finding anything because obviously, everything I find on the internet is, well, on the internet and therefore more popular than Endry.

My husband likes the name Clarity for a girl and Keaton for a boy. I’m okay with these names but they’re not my favorites.

On my list for girls: Poema, Lorelai, Seelie, and Lumi.

But as I said, my biggest thing is that I want a name just as unheard of as Endry for our “ours” baby. I would love to hear any advice/input/suggestions! Also, no names that start with E please!

No question, Endry is an unusual name. It doesn’t appear in the Social Security Administration data for last year, which means it was given to fewer than five children. And it looks like that’s true going back for decades! I’ve heard the surname Hendry; I wonder if Endry is a variant?

In any case, it definitely feels like a one-of-one name. But do you need to find another one? Or is a name that feels stylistically similar and not very common close enough? I ask because you have Lorelai on your shortlist. This spelling currently ranks #544 in the US; Lorelei comes in at #462. Combined, that’s over 1,200 girls receiving the name last year alone.

Poema, Seelie, Lumi, and Clarity all feel more distinctive and different. Clarity also has another edge: while it’s very unusual as a child’s given name, it’s familiar as a word, which makes it easy to spell and pronounce.

Likewise, Keaton stands at #572 for boys, and Caspian at #868. Thoreau and Walden are far less common.

Since it sounds like you’re both on board with finding a true rarity, let’s look at some fresh options – and I know the community will have some great ideas, too!

A Sister for Endry Mae

Desta – I hear this as a cousin to popular word name Destiny, but it actually has roots in Amharic – a Semitic language spoken in Ethiopia. It means joy. And yet, it’s been used in small numbers for years in the US. There’s a Toronto-based designer on the HGTV series Love It or List It named Desta Ostapyk. So I think it’s an intriguing name, hard to pin down, but with the same appeal as Endry.

Malou – Malou probably started out as a mash-up of Marie and Louise. (Or Mary and Louisa, or … you get the idea.) But I think it sounds modern and unexpected, and definitely rare.

Sibley – I see Seelie on your list. If it’s not quite right, would you consider Sibley? It’s a cousin to the name Sybil, but feels even less expected.

Sonnet – Word names like Clarity appeal because they’re unusual – and yet everyone recognizes them immediately. If Clarity isn’t quite right, might Sonnet appeal? It’s a little like Poema, too, but perhaps slightly more straightforward.

Tulip – Flower names like Rose and Lily are everywhere, but no one is naming their daughters Tulip. It would work beautifully, though.

Valancy – I’ve written about Valancy before. Lucy Maud Montgomery gave the name to a character in one of her less popular novels. It’s never caught on, and only the most diehard of fans would even recognize it, so I think it works wonderfully.

A Brother for Endry Mae

Auden – Austin was big in the 90s; August is white hot now. But how ’bout Auden? It’s literary, like Thoreau, and safely outside of the current Top 1000.

Calder – I feel like I recommend Calder all. the. time. And yet, there’s lots of appeal to this simple, but rare surname-name. A similar name you might also consider: Camber, though since it rhymes with Amber, it might work equally well for a daughter.

Fielding – I had Fielder on the first draft, but then I though about Fielding. The -ing ending makes this name rare, indeed – no one is naming their kid Jennings or Kipling or Harding. (Well, a very few.) Fielding fits in with surname-style names, as well as outdoorsy ones, but remains a style standout.

Kodiak – Kodiak is a place in Alaska; the Kodiak bear shares the name. It almost certainly comes from an indigenous language and means island, but it was whispered down the alley to its present form. It’s a strong, distinctive name for a son.

Loxley – Robin Hood was also known as Robin of Loxley. (Or Locksley.) It shortens to edgy nickname Lock.

Quest – How bold can you go? I think Quest makes a great name for a son, similar to the popular Journey, with an undeniably distinctive sound.

My favorite name for a daughter is Sonnet. I think it’s the best of Poema, with a nod to Clarity, too.

For a boy, I’m divided. That’s probably because I really do like Keaton as a brother for Endry, and Caspian, too – but both are more common than Endry. From your list, I’d pick Thoreau. Like the word names, it’s instantly familiar while still being very rare as a given name.

Looking at my suggestions, I think Kodiak appeals most strongly. But I’m not sure I’d use it, unless I had some affinity for the great outdoors/bears/something to do with Alaska. It seems a little specific. And yet, with names like Thoreau and Walden on your list, maybe that’s a fit?

Okay, readers, over to you – what truly distinctive names can you dream up for Endry Mae’s new sibling?