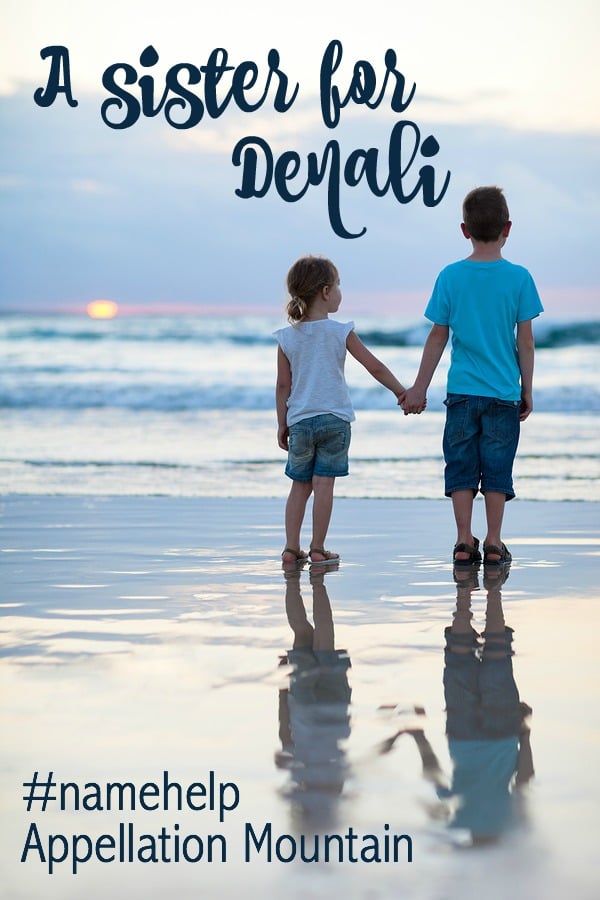 Name Help is a series at Appellation Mountain. Every Saturday – and some Mondays! – one reader’s name questions will be discussed.

Our son’s name is Denali, after the National Park (no, not the car). We love it. However, we picked such an unusual name for our first child, we don’t know how to go about choosing a name for the little girl we are expecting!

We do plan on using another less common name, but we aren’t committed to it being at a certain “level” of rareness (e.g. in the Top 1000 is certainly okay!).

We like names that aren’t invented but perhaps aren’t often used as names — we would love a name from science, literature, geography, or history. Obviously we love nature too, but we want to avoid any kind of theme, which rules out mountains, Alaska, etc. And definitely no cars!

In terms of sound, we would prefer to avoid “y” or “i” endings, and names starting with B, D, or N. Our last name is a short one-syllable, so 2+ syllables for a first name are a must.

Read on for my response, and please add your thoughtful suggestions in the comments.

The challenge of naming our first child is that it tends to feel like a blank slate – we could choose anything, so how do we go about narrowing the list?

The challenge of naming our second child is the exact opposite – some names that we would have considered now feel like they’re off the table, either because they’re too close to our firstborn’s name – or wildly different. The list is narrowed for us!

In your case, I think one question to ponder is this: do you want your daughter’s name to feel more feminine, or to hit the same gender neutral note as Denali? (Denali isn’t common at all, but it is used for boys and girls.) There are plenty of nature names that fall into this category, especially nature names like Rowan and River.

But I’m also thinking of lots of interesting, three-syllable names for girls that end with a. While they’re rare, they feel more conventionally feminine.

It’s not a decision you have to make now – and it might be the act of choosing the name that answers the question!

But I found myself circling back to the feminine-or-unisex debate as I looked at name possibilities, and it might be a subject to discuss with your partner.

I’ll include names that would work for both styles.

Juniper – The first name that comes to mind is Juniper. Denali and Juniper sound just right together, and while Juniper is more popular, it’s not Emma. (In 2014, Juniper ranked #490 for girls, which works out to a little over 600 girls.) Juniper is a nature name with an upbeat vibe. Strictly speaking, it’s gender neutral – Brother Juniper was a thirteenth century follower of Saint Francis, and Saint Junipero took his name in honor of him. But it’s far more common for girls today. Two similar choices that come to mind: Juno and Lavender.

Odessa – Odessa is one of my favorite underused names for girls. It’s so close to familiar choices like Olivia and Vanessa, and yet it’s completely different, too. While I can’t think of a tie between Odessa and science, I feel like this one touches on literature, geography, and history, too. Odessa is the feminine form of Odysseus, as in The Odyssey, as in an adventure-packed journey. It’s also a place name, of course, in the Ukraine and Texas, to name two. My favorite thing about Odessa is that it was in the US Top 1000 right into the 1950s, but is rare, rare, rare in 2016. I love the sound of Denali and Odessa, with the subtle repeating D.

Sonnet – Or maybe you’d like a name that is literally literary. Sonnet, Poem, and Fable all come to mind, but I think Sonnet might fit your criteria best. I think most people would recognize it as a literary term immediately, and yet Sonnet sounds like it could be a name. Maybe that’s because ends-in-t names like Violet and Scarlett are having a moment. Or maybe because it’s just a great name.

Marigold, Magnolia – Like Juniper, Marigold and Magnolia are quirky, slightly outside of the mainstream, nature names. But they feels more conventionally feminine. Magnolia, of course, ends in a, while Marigold comes from the flower name, originally a contraction of the phrase “Mary’s gold.” Both feel a little more vintage than new, though.

Hypatia – I feel like you’d prefer a name that’s more modern, rather than an ancient name revived. And yet Hypatia of Alexandria is tempting. She lived around the year 400 AD in Egypt, which was then part of the Byzantine Empire. Hypatia was an accomplished mathematician, astronomer, and philosopher, as well as a teacher.

Callisto – Of course, some ancient names feel and sound more modern. In myth, Callisto was one of the many beautiful women he pursued with disastrous consequences. She was turned into a bear and gave birth to a cub. Callisto lives on in the night sky in two forms. First, she’s Ursa Major. But second, the name Callisto was given to a moon of Jupiter. It’s a completely unexpected name and one that pairs well with Denali. Another rarity along those lines might be Thalassa.

Paloma – I’m not sure if Paloma is enough of a stand-out for you, and yet, it hits a lot of the right notes. It’s the Spanish word for dove, which associates it with peace, as well as the natural world. Pablo Picasso chose the name for his daughter, and is famous for painting doves, too. Avian names could be an entire list to ponder.

Angelou – Do you happen to be a fan of Maya Angelou? I think her surname – which she adopted in the 1950s while working as a calypso dancer – would make an amazing given name. But it’s so associated with the writer, you’d have to be prepared for questions about the inspiration behind your daughter’s name. Or maybe there’s another author you admire? Hawthorne, Salinger, and more authors’ surnames could all be great choices. With so many girls answering to Harper, this could be a great direction to consider.

Crescent – Here’s one that fits your not-really-used-as-a-name criteria beautifully, though there is a character in a popular YA series called Crescent Moon. (She’s a brilliant computer hacker whose character is based on Rapunzel.) Crescent is celestial, but also richly symbolic with ties to history over the millennia. After all, Mesopotamia developed in the Fertile Crescent. Like Sonnet, it might be a word, but it feels like it could easily become a name. Another name along these lines is Solstice.

Evening – I had Evening on my list of 13 cool middle names, but in this case, I’m tempted to promote Evening to given name status. It sounds so much like all of the popular Eve names – Evelyn, Eva, Evangeline. And yet the -ing ending is quite distinctive.

My favorites for you are the word names: Evening, Crescent, and Sonnet. But if you’d like something slightly more conventionally name-like, I think Callisto strikes the balance between a modern sound and roots as a given name.

Readers, what would you suggest for Bebe and her family?