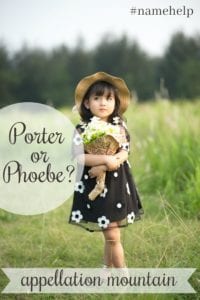 An update: welcome to the world, Thayer Grey! Natalie writes, ” … we were leaning towards Porter Blaire … but after sitting with it, I just couldn’t imagine calling her Porter. Phoebe … also didn’t sing. I pulled out an old, old list from when I was pregnant with my first daughter, and began reading names … towards the top of the list was Thayer.”

What a great name – and how lovely that it was right there, waiting for you!

I have so enjoyed reading your blog, and I am hoping you’ll take on my case!! I am pregnant with our second girl and have been struggling with a name.

Our first daughter is Tatum Scout, her middle name in honor of To Kill a Mocking Bird and Harper Lee. The name suits her, always felt right from the beginning and has many great nickname options (Tate, Tates, Scout, Scoutie …)

We really want our second daughter’s name to have meaning, too. I have been leaning toward Phoebe or Porter for months now.

I just like Phoebe, plus she’s Holden Caulfield’s sister in The Catcher in the Rye. (I do not like that I would be naming her after a male author’s creation, so would need to find a middle name that honors a woman).

Porter is the last name of the woman who wrote Pollyanna, which was a story I enjoyed as a child. Katherine Anne Porter is a Pulitzer Prize-winning author, and finally Miss Porter’s School is an all girl’s school in Connecticut (where I grew up), was started by Sarah Porter. She believed it was important that girls were educated, and that they learn chemistry, physiology, and other subjects that weren’t typically taught to women. I like the meaning of Porter, “to carry” or “gatekeeper.” And I also like the association with ports, partially because all of my ancestors came to this country via boat through Ellis Island, but also because ports, in a way, unite us all. A stretch, but I like the idea.

The biggest con about choosing Porter is it’s an occupational surname as a first name which is SO on trend. Most of my nephews and nieces have similar names (Cooper, Carter, Taylor …) Phoebe seems more unique in this way, although higher ranking in popularity.

I can’t choose! And I wonder if I’m missing another obvious choice — please, if you can weigh in!

Here’s what leaps out at me: Tatum feels just right with Phoebe, but it also sounds great with Porter. That’s because Tatum falls midway between the two, style-wise. And so I wonder if committing to Phoebe or Porter changes – ever so slightly – the way you hear Tatum’s name, too?

Let’s start with Porter. First, I think the imagery of ports and ships works nicely. Would some people think you’d lost your mind if you explained? Sure. But it makes sense, and I tend to think the same thing about names like Bridger and Harbor. So the meaning feels exactly right, even if it’s not as obvious as Mercy or Grace. And really, the meaning mostly stays private. It matters to you and your family, and hopefully to your daughter someday, too – which is why I tend to think that a stretch isn’t a problem at all.

Now, about the style question. It’s true that our playgrounds are chock full of kids named Carter and Piper and Hunter and Harper. It’s also true that some of those names tend to be used for girls; others lean towards the boys. Last year, nearly 800 boys and just under 50 girls were named Porter. That means this is a relatively uncommon name that may be perceived as masculine, and could easily trend higher for boys.

I’m never sure how to think about this. On the one hand, I can make the case for unisex names, especially when they nod to women of accomplishment, like the Porters on your list. And Piper feels thoroughly feminine, which has led to the rise of names like Parker and Palmer for our daughters. Why not Porter?

On the other hand, Porter makes Tatum seem much more like a unisex surname-name choice, and that makes me wonder if naming a third child (if that’s even a remote possibility) would be tougher. Tatum and Porter’s sister might be Sloane or Crosby or Kensington or Emery, but not so much Lucy or June … or even Phoebe.

Which brings us to Phoebe. I think it sounds great with Tatum, and sidesteps the potentially masculine vibe of Porter. Though, of course, Phoebe doesn’t honor strong women. Or does it? Besides 90s television, my first association with Phoebe is Greek myth. Long associated with the moon, Phoebe was first a Titan, one of the primordial gods. Later, the name belonged to Phoebe’s descendant, Artemis, the goddess of the hunt. That’s a powerful association.

Also, do you know the story of Phoebe Couzins? She was one of the first female lawyers in the United States, and the very first woman to graduate from an American law school. As if that wasn’t enough, Couzins became the first female US Marshal.

There’s also philanthropist and suffrage Phoebe Hearst, as well as early aviator and stunt flyer Phoebe Omlie. While never too popular, Phoebe was in steady use in the late nineteenth and early twentieth centuries, so there are women of accomplishment by the name.

If not Porter or Phoebe, I wonder if you might consider:

Austen – For Jane. It’s tricky to recommend author names, I think. If you’re a fan, it works. If not, this one might fall flat. But Jane Austen reigns as a remarkably accomplished female author. And while Austin has been a Top 100 pick for boys in recent years, I think Austen works nicely for a daughter.

Cady – The downside? It will be misheard as Katie, every. single. time. The upside? Elizabeth Cady Stanton makes for a clear reference to a strong woman, plus most people will immediately get it once they hear your explanation – and never forget Cady’s name.

Georgia – As in the artist, Georgia O’Keefe. It feels like a sister name for Phoebe. Though, of course, Georgia might feel too much like a reference to all those regal Georges.

Maret – When it comes to traditional feminine names, it’s tough to top Mary and Margaret. Dozens of distinguished women answer to both. Maret is typically listed as a contracted form of Margaret, though I’ve seen it linked to Mary, too. So that makes Maret traditionalish, but thoroughly modern in sound, a sister for Tatum. If there’s a Margaret or Mary or two that you love, would that work?

Maya – Here’s the thing: Maya has ranked in the US Top 100 for fifteen years. You probably know a few. And yet, it still doesn’t feel too common, at least to my ear. And the reference to Maya Angelou might appeal. (I recommended Angelou to a mom years ago, too – wonder if she seriously considered it?) There’s also designer Maya Lin, architect of the Vietnam and Civil Rights memorials.

Sojourner – Sojourner Truth re-named herself as an adult, believing that her name was determined by God. (Her birth name is listed as Isabella.) She’s a towering figure, and her name feels decidedly modern. A sojourner is a traveler, though it’s a rather poetic, even archaic term. Tourist and visitor aren’t names, but Sojourner? That works.

Overall, I’m leaning slightly towards Phoebe – if only because of the (theoretical) third child question. Though I’m also wondering if you’d like Truth as a middle name? I love the sound of Phoebe Truth, but I think it works with lots of first name possibilities.

But let’s do two things: first, let’s have a poll.

And now, let’s open it up to suggestions. Readers, what are your best names to honor strong women?