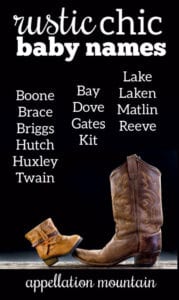 My husband and I live on a ranch in Oklahoma, so we are both drawn to Southern, country, outdoorsy names. I also love boy names for girls! However, most of the names we like are taken by family members or friends.

For girls, we like Wyatt, Mac, Scout, Hayes, and I like Gatlin but my husband hates that name.

For boys we like Townes, Ripp, Ridge, and Hud.

Any help would be greatly appreciated!

I love answering questions like this, probably because I live in the opposite of Oklahoma and never hear names like this, so they’re fresh to my ear!

It sounds like you’re beginning a search with lots of names already off the table, and a general style direction. But let me start with some big picture questions.

Are you interested in a very different name only because so many of your favorites are taken? I recently spoke with a mom from a big family. Her kids have dozens of cousins. As a result, her kids have names that are a little different. And now she’s expecting again, and realized that the name Luke isn’t taken. And they all love it. So it’s good to think through. Are you looking for something that’s not in use, actual popularity aside? Or do you want something really different?

When it comes to boy names on girls, give that a little bit of thought. There’s no reason a traditionally masculine name can’t work well for a daughter. But there’s more than one category of BNOG – boy names on girls. Wyatt strikes me as challenging precisely because it’s quite popular for boys. (#26 in the US; #9 in Oklahoma!) Would you be satisfied with a name your daughter will share with others, even if she’s the only girl? (I knew someone who was called “Girl Ryan” in school, to distinguish her from Ryan S. and Ryan G.) On the other hand, Scout – and lots of similar names – feel like they could be masculine, and they sometimes are, but we tend to use them for girls. (Credit to Jean Louise Finch, of course.)

Do you have a preference between nickname names and more complete ones? Mac, Hud, and Ripp all invite the question: oh, what’s that short for? That hasn’t stopped plenty of parents from bestowing them independently – and there are good reasons to skip the formal name. But you might want to think about your child’s whole name. Hud William LastName or Hud Wyatt LastName seems a little more substantial than Hud Ridge LastName.

With all of those questions raised, let’s move on to the names.

Bay – Two meanings tie Bay to the natural world – it’s the rich chestnut red-brown color, used to describe horses’ coats. It’s also a body of water. The sound seems short and bright, right at home with others on your list. And while it’s rare as a given name, we’ve called our daughters Kay and Faye and Bea, so this fits right in.

Dove – Bird names are having a moment, with Wren leading the flock. But Dove has promise, too. Besides the avian connection, it’s a powerful symbol of peace. Larry McMurtry’s Lonesome Dove series makes it feel a little more at home on the range, too. (In the books, Lonesome Dove isn’t a character’s name – it’s a fictional Texas border town.

Gates – I first read this name in a Curtis Sittenfeld novel, Prep. That might imply it has a different vibe, but I think that’s the great thing about rare surname names: they feel equally at home in the heart of Boston or on a sprawling ranch.

Kit – Short for Christopher or Katherine, Kit feels a little bit classic, a little bit sweet, and maybe a little bit rebellious, too. American frontiersman Kit Carson makes me think this shape-shifter of a name would work well in your family.

Lake, Laken – Surname names are stylish. So are names that sound like surnames but aren’t terribly common as such. (For every Jackson, there’s a Ryker.) Laken falls into that category. I think it works well with the kinds of favorites you’ve listed. Another option is to go with the straight-up word name, Lake.

Matlin – If Gatlin is out, would Matlin be an option? It’s a surname, either related to a German place name meaning alpine meadow, or possibly derived from an older name. The downside: it sounds like a choppy pronunciation of Madeline, and might be mistaken for that name. The upside: NO ONE is using it. It’s been given to just a handful of girls.

Reeve – Reese Witherspoon made her family surname name big for girls. Reeve mixes up Reese with Eve, and brings to mind Reeve Morrow Lindbergh, the youngest child of Charles and Anne Morrow Lindbergh, once the most famous family of their age. It’s slightly more popular for boys, but overall so rare that it your daughter would never have to share.

Boone – Unlike most names on this list, Boone appears in the US Top 1000 – in fact, it currently ranks #669. But it has so much appeal! It’s short and strong, plus it has a great meaning: good, or benefit.

Brace – If Chase and Wade are boy names, how ’bout Brace? To brace something is to make it stronger, typically by using wood, metal, or another type of support. And if something is bracing, it’s invigorating and energizing. So there’s lots of positive imagery here, and the name is wildly rare.

Briggs – I think Briggs falls somewhere between Ridge and Townes. There’s also Riggs to consider, but the B in Briggs adds a little more.

Hutch – Maybe Hutch wouldn’t be on my radar without this post, but it is. Like Hud and Ripp, it’s a nickname. But somehow it sounds just a little more substantial. If you’re wondering a nickname for what, exactly? Hutch comes from Hugh, via nicknames like Hutchin. That means it shares Hugh’s meaning: heart.

Huxley – Another surname name, Huxley brings to mind the accomplished English family, including author Aldous and scientist Thomas. The middle ‘x’ makes for a cool sound, and nickname Hux feels like a successor to Jax.

Twain – Mark Twain makes this surname literary and familiar. It’s rare, too – among the rarest names on this list.

Overall, I think my favorites are Briggs and Kit, but ask me again tomorrow, and I might change my mind. And if Matlin splits the difference between Gatlin and your husband’s preferences, then that gets my enthusiastic vote.

Readers, I know you’ll have some brilliant suggestions. What name makes sense for an Oklahoma-born baby?