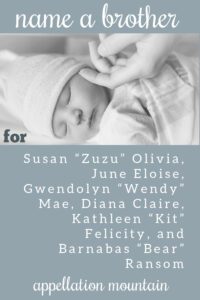 You helped us with baby five, and we are in dire straights coming up with a name for our 7th (and last!) baby!

Our kiddos are named:

Our last baby is a boy, and we would like to avoid reusing initials (s,o,j,e,g,m,d,c,b,r) if possible. But we realize this might not be possible!

Some names we ruled out but were close:

Names we are still considering:

We like heard of but uncommon names- nothing in the top 100!

At first glance, you’ve ruled out an awful lot of letters. And yet, that still leaves us with A, H, I, L, N, P, Q, T, U, V, X, and Y – not too shabby! I’ve dropped Z and W as well … while I know they’re nicknames, my brain keeps hearing them as already taken.

Hugo came to mind immediately. I think it has that same gentlemanly, old world quality as Barnabas, with a touch of the cuddly Bear, too – a perfect brother name. Thatcher and Ulysses have plenty of appeal, too.

Before we get to firsts, can we talk about middles for a minute? First, I feel like repeating a middle initial for a first name might be more tolerable, if t comes to that. Second, since Olivia and Claire are Top 100 choices, I wonder if a great middle name that’s slightly popular could work? Because I keep coming back to Xavier.

Now, on to some new first name possibilities!

A NAME FOR BABY SEVEN

There are so many great A names for boys! Asa, Arlo, Abraham, August, Abel … But I’m going to suggest Archer. It’s a cousin to Thatcher, but comes with built-in nickname Archie. I can also imagine Arthur called Archie, though the sounds aren’t perfectly there.

A short, strong nature name, Heath rose sharply in the late 1960s, thanks to a television Western called The Big Valley. If it hadn’t caught on then, it could be huge now in our River/Rowan moment – and that makes it a perfect option for a child born now.

It has a great meaning – fiery – and a long history of sparing use. Plus, nicknames from Iggy to Ike to Nate to Nash make it easier to wear than it first appears.

An obvious brother for Barnabas, especially because it has its own built-in animal kingdom nickname: Leo! Lionel and Leonel work, too.

If surnames are on the table, how about Nelson? A long list of notable Nelsons make this name feel more traditional than modern surname favorites.

While we’re on the surname topic, would Paxton work? Traditional P names for boys, like Philip and Peter, are underused gems worthy of consideration, too. But I can imagine Paxton as a great first or middle with your kids’ names.

This could be great, except … Quentin means five. Is that too out-of-sequence? I can’t decide, but the sound is great. (And I’ve certainly known plenty of boys with variations of the name who weren’t fifth children!)

I think Thaddeus and Barnabas share the same vibe. It could shorten to Tad, Thad, and maybe Todd or Tate.

From your list, Hugo Thatcher is immediately my top pick. I think it goes so well with your older children’s names, and – amazingly! – doesn’t repeat an initial.

If I were choosing from my suggestions, I’m most drawn to Leland Xavier, Leo for short – or maybe Lane or even Lex?