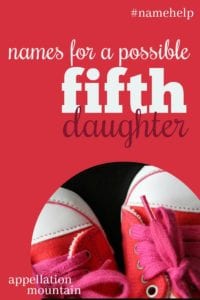 We are pregnant with our fifth baby!

We don’t know the gender yet but already have four girls: Susan (Zuzu), June, Gwendolyn (Wendy), and Diana.

If we have a boy, we want to use the name Reuben, but we have NO IDEA what to do for a girls name! My husband likes Florence, but wants to use the nickname Floy and I am not a fan.

Congratulations on your new baby! It’s exciting that you have a boy name all picked out and ready to go. But wow, after naming four girls, I can imagine it’s tough to agree on a fifth name as wonderful as the ones you’ve already chosen!

My first question is this: is Florence out only with the nickname Floy? Would Florence called Flossie or Flora or Flick be an option? I don’t think it’s the most obvious style match for your older girls’ names, but that’s not necessarily a problem.

Because if your husband is willing to compromise to make Florence work for your family, I think maybe it belongs on your shortlist.

If we’re naming a sister for Zuzu, June, Wendy, and Diana, we’re looking for a name that is slightly mid-century, a name with some history, but not a Victoriana vintage choice. It should lean a little quirky, too, I think – especially with playful sister names like Zuzu and Wendy, it can’t be too buttoned-down.

Bettina – We all recognize Bettina as a name, but it’s far from common. It can shorten to Betty or maybe even Betsy, and all three names are cousins to the evergreen Elizabeth. I love the sound of Betty with Wendy and Zuzu and June, but I think Bettina might fit even better when Diana is considered.

Dorothy – Florence feels a little more vintage than your older girls’ names, and so I found myself thinking of Dorothy. Strictly speaking, Dorothy was most popular in the 1920s, a few decades more recently than Florence. But I think they both feel similarly antique. The benefit of Dorothy? All sorts of delicious nicknames, like Dolly, Dot, Dory, and Doe. Or maybe even Rory if you’d like something a little more boyish – which might be a bit like Floy.

Joy – Floy makes me think of Joy – but is it too close to June? It might be short for a longer name, like Jocelyn, but it typically stands alone.

Mamie – Because the novel, musical, and movie Auntie Mame came out in the 1950s, we sometimes think of this as an especially mid-century name. Factor in First Lady Mamie Eisenhower, and it feels right at home in the era. But in truth, Mamie’s been around for ages, a sometimes-nickname for Mary and Margaret. In our age of Maisie, though, I think it stands on its own.

Nancy – A 1940s favorite, Nancy brings to mind the whip-smart heroine of all those detective novels, Nancy Drew. She’d fit right in with Wendy and Zuzu and the rest of your girls’ names. Nancy started out as a nickname for Ann, but today it stands on its own.

Romy – Romy is relatively unknown in the US, but it’s traditional in German, a contracted form of Rosemarie. You can use it on its own, or as a short form of Rosemarie, Rosemary, or even Romilly, though that might be too out-there.

Sabrina – I feel like Gwendolyn and Sabrina are logical sister names, and Sabrina fits in well with Susan, June, and Diana, too.

Veronica – The first name that I thought of when I read your list! Maybe it’s because of the great short forms – Vee, Vera, Nica – or maybe because it’s one of those names that feels a little bit throwback, but isn’t quite antique just yet. I’d call it a quirky classic, just like your older girls’ names!

Overall, I’m drawn to something longer, like Veronica or Bettina, with a sparky nickname. But in the spirit of compromise, I think it might be worth thinking about whether there’s another Florence nickname that you could both love, or whether Joy might stand in for Floy.

But I know the readers will have even more great suggestions, so let’s turn it over to the community.

What would you name a sister for Susan (Zuzu), June, Gwendolyn (Wendy), and Diana?