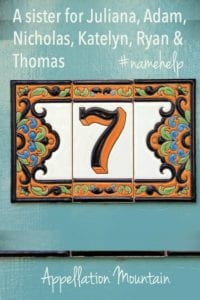 I’m due soon with a baby girl. She’s our seventh child.

Our older kids are:

As you can see, our naming style is fairly traditional. But we try to go for names that are super popular either. The only hard rule is that I won’t repeat the first letter of any first names (so no J, A, N, K, R or T names). Our last name starts with B, so we would rather not use a B name either.

Any suggestions for this little girl?

Congratulations on baby #7! Even when we like our names simple and straightforward, having a larger family can make it feel like there are fewer options. (Naming is one of those rare cases where experience doesn’t make it easier.)

Let’s start with the letters that we can consider:

That’s pretty good! In fact, I’m thinking of dozens of names, just based on those letters.

Since you didn’t mention nicknames, I suspect your kids mostly use their full names. (Though maybe Thomas is Tom or Tommy, and Juliana sometimes Julie or Jules?) That means we’ll avoid girls’ names that invite a lot of different nicknames, like Margaret or Elizabeth. We’re looking for a name that is two-syllables or more, traditional but not old-fashioned, and feminine.

Even with the letter restrictions, that still leaves LOTS of options. And I think that’s the hidden difficulty of this kind of naming. In many ways, it’s easier to choose names when lots of options are ruled out from the beginning.

Celeste – My first thought was Colette, but that’s awfully close to Cole, shares the same sound as Katelyn, and is related to Nicholas. So maybe Celeste instead? It feels feminine, familiar, and timeless. I love the sound of something like Celeste Madeleine/Madeline/Madalyn/Madelyn.

Elise or Eliza – Both names derive from Elizabeth, but unlike Elizabeth, they tend to be used nickname-free. Elise seems a little softer, while Eliza feels a little bit spunkier. But both hit the right note.

Felicity – You can’t beat Felicity’s meaning – happy. Felicity Jones is the young star of Rogue One, one of many reasons this name has increased in popularity over recent years.

Genevieve – I really wanted to suggest an Ev- name, but Evelyn and Eva seem too popular, and other Ev- names feel too obscure. So I landed on Genevieve instead. I think it’s a good match for your older kids’ names, but still different.

Georgia – Georgia fits in so many categories – it’s a traditional name, the feminine form of George. It counts as a place name, too. Georgia O’Keefe makes it artistic, and it feels like a modern favorite, even if it’s not truly new.

Hadley – Juliana feels long, lovely, and romantic. Katelyn leans more tailored and modern. I wonder if something like Hadley – a surname-name that isn’t too common – would appeal? It’s used almost exclusively for girls, thanks to Hadley Richardson Hemingway, the first wife of the author Ernest.

Meredith – Meredith strikes me as a great traditional, but not-too-common choice for a daughter. Juliana, Katelyn, and Meredith work together nicely, too.

Simone – Along with Meredith, I always find Simone an instantly recognized name that too few families consider.

Overall, I think my favorites are Eliza and Elise. I love the sound of Eliza Meredith or Elise Hadley. But I know the community will have some marvelous suggestions, too!

Readers, what would you name a sister for Juliana, Adam, Nicholas, Katelyn, Ryan, and Thomas?