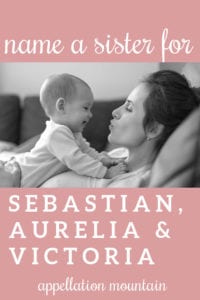 We have a son named Sebastian and twin daughters named Victoria and Aurelia. Now we’re expecting our fourth child. We’re team green this time (as we have boy and girl gear ready to go, LOL!) but it’s making finding a name doubly hard.

If it’s a boy, we’re pretty set on Julian, though we like Augustine/Augustus a lot, too.

But I don’t want to repeat initials. (I’m one of four kids, all with R names, because my parents both had R names. Love my family, but no thank you!)

Girls we’re stumped. While we like long names and use cute nicknames at home, we call our kids by their full names in public. So don’t want something that feels like it would be shortened. (Worried with Victoria but hasn’t happened.)

Plus, feeling this is a girl!

Evangeline – but I like -a ending names better, maybe?

Liliana – but don’t know how to spell it, and feel like it would just be Lily

What haven’t we thought of that would be perfect?

Read on for my response and please share your thoughtful suggestions in the comments.

It can be hard enough finding one name you love, so I completely understand why it’s even tougher to settle on two – knowing you’ll only use one of them. But I think Julian checks every box for a son – it’s a good match for your older kids’ names, and it doesn’t repeat initials. And while I’m sure it can be shortened, to Jules and Juju and lots of other nicknames, it really doesn’t need to be.

Now let’s pause on the initials-repeating question. I hear you loud and clear on having everyone share the same initial. But you have S, V, and A so far. It seems like you could repeat one of those without feeling trapped in a pattern – or even having anyone notice that the names repeat.

I’ve avoided those letters, along with R, for my list. But if you stumble across a name like Saskia or Veronica or Arcadia and feel like it’s meant to be your daughter’s name? I wouldn’t hesitate.

On to the suggestions!

Cecilia – A flowing name with a lovely, liquid sound, it’s easy to imagine Cecilia being used in full, without a nickname.

Cordelia – A name everyone recognizes, but nearly no one is using, literary Cordelia seems like a great fit with Victoria and Aurelia style-wise … but maybe these ends-with-lia names are too close to Aurelia?

Davina – A feminine form of David, Davina is relatively uncommon in the US. But it’s unlikely to be shortened, and it sounds just right with your kids’ names.

Felicity – You’ve mentioned a preference for -a ending girl names, but maybe Felicity is that name worth making an exception?

Linnea – I agree that Liliana presents a spelling challenge, but how about Linnea? Also known as the twinflower, it’s named for botanist Carolus Linnaeus.

Mariana – Maybe Mariana shares the same issue as Liliana – spelling. But someone Mariana feels like less of an challenge. It’s elaborate and romantic, the perfect sister for Aurelia and Victoria.

Ophelia – If popularity weren’t a concern, I imagine Olivia might’ve been on your list. (But it’s the #1 name for girls in the US right now, so … maybe that rules it out?) I’m suggesting Ophelia instead, with the bonus that it seems very unlikely to be shortened.

Theodora – Theodore is a fast-rising favorite for our sons, and now Theadora is gaining attention for girls, too.

Overall, my favorite is Davina.

I think it hits the same familiar, but not wildly popular note as Aurelia. It’s not likely to be shortened. It doesn’t repeat an initial.

And, of course, if it leaves the door open to naming a future son Julian, should that come to pass.

But let’s open it up to the community, because I know readers will have some great suggestions.

What would you name a sister for Sebastian, Aurelia, and Victoria?