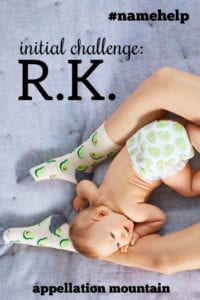 Before my first was born, I knew I wanted to name her Josephine (after my grandmother and one of my favorite literary characters of all time – Jo March from Little Women). My husband wasn’t completely sold initially, but loved the idea of using Jo as a nickname. It’s grown on him since she was born – she definitely looks like and has the personality of a Jo. We ended up choosing Maryanne as her middle name, after my mother-in-law.

Until after our sweet girl was born, I didn’t realize that she and I share the same initials – JM. Now on the verge of our second, my husband, Robert Kyle has his heart set on sharing his initials with our new little one.

For a girl, we’ve settled on Katherine as the middle name, but we’re stumped on the first name. We’ve tossed around Rosalie, which I love because we can call her Rosie. Unfortunately my husband is not a fan of Rosalie. He suggested Rosaline or Rosalyn instead, but I’m not a fan of either. And as far as boy names go, we’re completely stumped.

I love the idea of mirroring your husband’s initials for this child.

But it does mean this: you may have a choose a name you love (slightly) less to make the meaningful pattern work. And that’s completely fine!

There are lots of Rose names, and while I’m tempted to suggest them all – Rosemary! Rosalind! Rosario! – I wonder if another R option might work better?

Ramona – The hero of an enduring children’s book, Ramona was a smash hit name of the 1920s. Today it’s on the upswing again.

Rebecca – I know, I know. Becky belongs to another era, stuck on the playground with Melissa and Jenny. But Rebecca in full is a little different. Nicknames Becca and Bex feel like fresh updates, too. So … Josephine and Rebecca, Jo and Bex?

Reese – Josephine is traditionally feminine, so I skipped all of the more unisex and modern options on the first draft of this list. Except … that leaves you with relatively few R names to pick from. So I wonder if it’s worth considering Reese? Ms. Witherspoon means that it’s long felt like an acceptable choice for a girl, and Jo and Reese feel quite compatible. (Plus I love the balance of Reese Katherine.)

Robin – Of course, you could mirror her father’s name even more closely with Robin. While Robin had a good run in the 1960s, it’s showing hints of a comeback on the heels of other bird names, like Wren.

Romilly – It’s not a Rose name, but it’s similar to Rosemary. A rare surname name, Romilly is a French place name turned surname, and occasionally heard as a first, too.

Rowan – If I have any hesitation with Rowan and Romilly – and maybe Robin, too! – it’s the potential to call your kiddos Jo and Ro. That’s either darling or annoying, depending on your reaction. Like Reese, Rowan is unisex. And I do like it quite a bit with Jo.

Rory – It might be more accurate to call Rory borrowed from the boys, but Americans tend to hear it as acceptably feminine. (Yes, even before Gilmore Girls!) Jo and Rory are great together!

Let’s say none of those feel quite right. Would you consider:

Calling her Kate? Jo and Kate sound like sisters, and it’s not the end of the world to go through life as R. Katherine. Fun fact: Katharine Hepburn – called Kate – played Jo in the 1933 screen version of Little Women. She often remarked that it was one of her favorite roles.

Parents who agree readily on a girl’s name often struggle to name a son, or vice versa. We often have slightly different ideas about what makes a great boy’s name, and that can trip us up!

I’m going to suggest R names from lots of different style categories, in hopes that one of them feels right.

Reid, Reed – The ‘ei’ spelling is slightly more common. I like the simplicity and strong sound of Reid. And while it’s modern, in the sense that it wasn’t a Top 100 pick a century – or even fifty years – back, it feels rooted in history.

Rhett – A Southern gentleman name, probably thanks to the enduring legacy of Gone With the Wind, and Clark Gable’s Oscar-nominated performance. It’s gaining in use, but remains outside of the current US Top 100.

Robert – I’m not suggesting a junior necessarily … but since your husband uses his middle, there’s no real reason to avoid Robert, right? It’s a classic, one that’s neither in fashion nor out of step. Bob feels a little Boomer, but Robbie and Rob strike me as perfectly reasonable on a child today. And Bobby? It’s currently in the top 100 in England.

Roman – Okay, we’re back to the Jo and Ro problem. Except it’s rare to hear anyone shorten Roman. It’s a strong name with a big sound.

Royce – Fun fact: Royce is sometimes associated with roses. It has more than one possible root, but we know it mostly as a surname. And while naming kids after luxury brands can feel a little extreme, Royce doesn’t scream Silver Phantom.

Ryan – It’s not as traditional as William or James, but I think Ryan counts as a modern classic. It has ranked in the US Top 100 since 1971. In fact, it’s been in the Top 50 since 1972. I feel like you must have considered the name at some point, and yet … I think it’s worth looking at with fresh eyes.

As for middles? If you don’t go with Robert as a first, I’d suggest Kyle. Or maybe Kieran, Keaton, Kai, Kane, or – if the silent K doesn’t feel like a disqualifier – Knox.

Overall, I really like Reese Katherine or Ruth Katherine. (Or maybe calling her Kate?) For boys, I’m more torn. Roman Kyle and Raphael Kyle are my favorites. (Or possibly Raphael Kai?)

But I know our readers will have more great suggestions.

What would you name a brother or sister for Josephine Maryanne, if you had to use the initials RK?