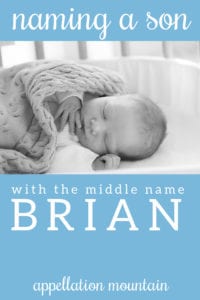 My husband and I are expecting our first child very soon – in June! We’re completely stuck on names.

Most of this is because my dream of a mother-in-law is obsessed with the idea that we’ll name him Brian, after my father-in-law.

When she first suggested it (over FaceTime, because of course we haven’t seen them in a year), we both sort of thought she was kidding. But it’s come up again and again, and she’s even referred to him as “little Brian” a few times.

At first we agreed that Brian maybe, possibly, might be the middle name. And now we’ve sort of decided it should be. But we agree that it’s just not his first name.

My husband, James, is named after his grandfather, so the idea isn’t completely out of the blue.

I’m not crazy about my super-trendy 90s name, and sharing it with a huge celebrity has been a mixed bag. But then, of course, I had to go and marry a man named James. (Jimmy/Jim as a child, but James by the time I met him.) And now we’re James and Taylor.

We want our son’s name to be a traditional name that everyone recognizes, that isn’t too trendy like my name, that isn’t too common like my husband’s name, and ideally won’t have a nickname. (Because my husband really dislikes it when people assume he’s Jimmy/Jim.)

And … it can’t be Brian, but it probably should work with Brian as a middle name. Names we mostly like, like Dylan, don’t sound great with Brian.

The baby’s last name will be tussle-with-an-R.

And while it’s sometimes infuriating to have a family name thrust upon you, it seems like you’re open to this one and accepting it gracefully – even if it’s been a little awkward along the way.

So we’re looking for a name that fits in the first spot: _____ Brian Tussle-with-an-R.

And it should be traditional, nickname-proof, and not too popular, right?

I’m wondering if you’re thinking of classic-classic names, like Peter or Edward? Or if your list is broader, encompassing names with roots, but not used in big numbers until recently, more like Beckett? I’ll mix a little of both in this list.

Because both Brian and your surname are two-syllable names, it might also be good to consider shorter or longer firsts. It’s not a must – and I haven’t stuck to the rule in my suggestions! – but it can making for a pleasing rhythm.

FIRST NAMES TO GO WITH BRIAN

Of course, Anthony can be shortened – a generation of Tonys promises us that. But an Anthony born today would share a playground with Sebastian-not-Seb and William-not-Will. The only little Anthony I know is about eight and has only ever been Anthony. It’s terribly dashing in full – in fact, it’s the name of the eldest Bridgerton brother.

I wouldn’t call Brooks classic in the James-Joseph-William sense, but it feels traditional, probably thanks to all those navy blue Brooks Brothers blazers. Brooks Brian is kind of fun to say together, too.

Just inside the current US Top 100, Everett fits with names like Oliver and Beckett. It’s current, but rooted in the past. And it’s rarely shortened.

A Hebrew name meaning gift, Jesse has a long history of use, but a very contemporary sound. It’s tough to pin Jesse to any single decade – a hallmark of a traditional name.

The first version of this list included Luke … until I said “Luke Brian” together, as in the country singer. But Jude has the same qualities – brief, complete, and distinctive.

There are so many handsome Max names, but it’s the three-letter original that remains most popular – but not too popular – in the US. It’s brief and complete, a name that requires no lengthening and permits no shortening. And while it’s current in the twenty-first century, it’s never really fallen out of use, either.

Pretty much every Samuel is a Sam, without exception. And some Sams really are just Sam. There’s also a handful named Samson or Samir. But my gut tells me that Samuel-called-Sam actually satisfies the spirit of your rules, if not the letter. It’s a handsome, down-to-earth, accessible kind of name that’s surprisingly versatile, as right for a surgeon as it is for an artist.

I’ll take the opposite approach here, and suggest Theo rather than Theodore. (Though much of the same logical applies with Theo/Theodore and Sam/Samuel.) The bright ‘o’ ending feels modern and unexpected. But no one could ever call Theo anything but a traditional favorite.

Overall, my favorite for you is Brooks Brian Tussle-with-an-R. But that’s based on the whole flow of the name. Plus, Brooks hits the nickname-proof mark exactly. But maybe Brooks feels a little less traditional than you’d like? In that case, my vote goes to Sam, even though I suspect you’d probably opt for Samuel Brian Tussle-with-an-R.

Readers, what would you suggest for a traditional(ish), nickname-proof first to go with the middle name Brian?